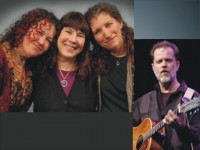 A founding member of the Buffalo Gals, Goddess Martha has worked in Nashville, done several TV commercials, and also performs both solo and with her husband Tom Griffith. Goddess Judith was part of the NYC folk scene and recorded numerous times for Fast Folk Musical Magazine (now Smithsonian-Fast Folk). She was also featured in several of the Fast Folk Revues at The Bottom Line. In lieu of having a midlife crisis, Goddess Hillary opted to pick up a guitar for the first time since junior high and embark on a career as a folksinger. Now, as one-third of the popular folk-harmony trio Gathering Time, she is also a respected songwriter and performer in her own right.

Tom has written songs for and with International Blues Challenge Award-winner Toby Walker and has produced tracks for him and a number of notable LI-based artists. A winner of two Clios, a Cannes Silver Lion, and a National Education Fiction Video Award for his tunes that have appeared in commercials and several movies, Tom recently finished creating music and sound design cues for the award-winning computer game Prominence.