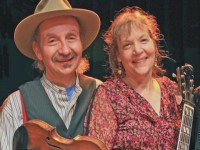 Of course Ashokan Farewell is only part of the story. Since joining forces in the late 1970s, Jay and Molly have become one of the most celebrated duos on the American acoustic music scene. With their inclusive sense of fun and their deep love of the music, they make each concert a musical journey. Their warmth and wit — coupled with consummate musicianship — have delighted audiences worldwide.

Listen to the timeless renditions of hard-driving Appalachian, Cajun and Celtic fiddle tunes, stirring Civil War classics, sassy songs from the golden age of swing and country, stunning waltzes, and deeply moving original compositions. It’s immediately apparent why Jay and Molly concerts warm the heart, feed the soul, and appeal to all ages. No wonder they continue to receive widespread critical praise.

They’ve garnered legions of fans through their appearances on Great Performances, A Prairie Home Companion, their own public radio specials, and work on film soundtracks such as Brother’s Keeper, Legends of the Fall, and a host of Ken Burns documentaries.

And what of the event that inspired their signature tune? Jay and Molly’s Ashokan Fiddle & Dance Camps — in New York’s Catskill Mountains — remain a favorite learning vacation destination for music and dance enthusiasts all across the country.

If you love American acoustic music, a Jay Ungar & Molly Mason concert is a must.