No Fuss and Feathers 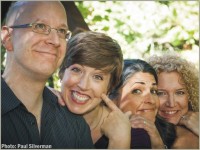 No Fuss And Feathers is the New York-based “heck-of-a-good-time” collaboration hatched by The YaYas (Catherine Miles and Jay Mafale), Karyn Oliver, and Carolann Solebello. The group — which released its first CD, Traveling Circus, earlier this year — opened for Tom Paxton during the 2015 Huntington Folk Festival, while its individual members have all previously performed for FMSH.

Onstage, NFF is a dynamic, cohesive cocktail of delicious harmonies, infectious rhythm, and spontaneous hilarity — with award-winning songwriting always at center stage. Individually, the four are nationally touring performers who have charted at the top of Folk and Americana radio and appeared on stage at some of the nation’s most respected festivals and venues. Collectively, they are an incorrigible bunch of musical co-conspirators bent on giving their audience an unforgettable show.

Carolann, Karyn, Catherine, and Jay are four long-time friends who tour independently of each other, but decided it would be fun to play together sometimes. What started out as an occasional songwriters-in-the-round side project quickly evolved into a full-fledged band. Sometimes referred to as a modern folk quartet, No Fuss And Feathers is truly a mix of the styles of the three songwriting entities: pop-infused-literate folk, bluesy-country-tinged acoustic, and Brooklyn-edged-Americana.