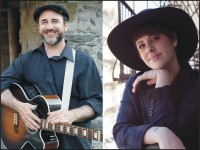 Jon Shain is a veteran singer-songwriter and guitarist who’s been turning heads for years with his words, his fiery acoustic guitar work, and his evolved musical style — combining improvised Piedmont blues with bluegrass, swing, and ragtime. His newest disc, a duet album with Joe Newberry entitled Crow the Dawn, was released in January 2016. Shain grew up in Haverhill, Massachusetts and resides in Durham, North Carolina. In addition to recording and performing, Shain – whose work touches on the trials and tribulations of regular people, as well as themes of social justice – teaches Piedmont blues guitar and leads songwriting workshops.
(jonshain.com)

Jessy Tomsko is a NYC-based singer-songwriter who originally hails from Philadelphia. Known for her catchy yet genuine and confessional style, Tomsko is a versatile vocalist, guitarist, pianist, and composer. Although writing and performing primarily in the ever-expanding “folk” genre, she first began experimenting with songwriting while attending a conservatory and earning a music degree in classical voice performance. Her roots in classical music and musical theater provided Tomsko with a solid musical foundation and inspired her along the way to finding her own voice. Tomsko has independently released several EPs and albums and is working on a new one, Wild and Good. (jessytomskomsusic.com)