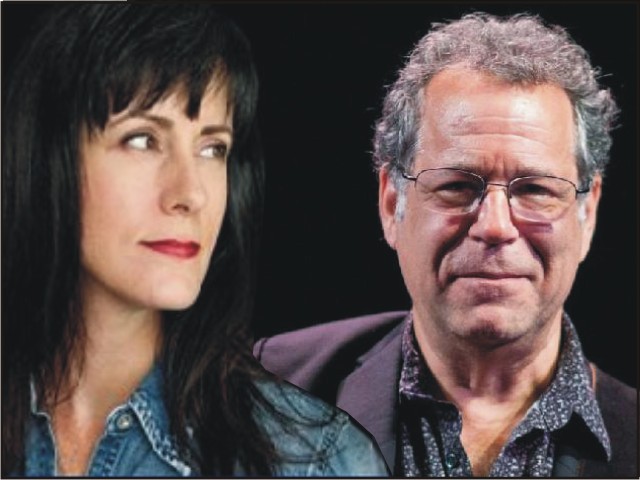 Cliff Eberhardt has been a fixture on the acoustic singer-songwriter scene for several decades. Part of the Fast Folk Musical Magazine community of artists in New York City during the 1980s, he recorded for Windham Hill in the 1990s and later for Shanachie and Red House Records. He also was heard on popular commercial jingles for Coke and Chevrolet. Hailed as “One of the most talented musicians on the solo acoustic circuit” (Seattle Post Intelligencer), Eberhardt also has had his songs covered by such notable artists as Shawn Colvin, Cry Cry Cry, the late Richie Havens (with whom he performed and sang the title cut on his Windham Hill debut, The Long Road), and Buffy Sainte Marie. In 2013, he received a Helen Hayes Award for sound design in recognition of his original music and performance the previous year in The Taming of the Shrew at Washington, DC’s Folger Theater. He’s also recorded an album entitled Shrew Songs.

Louise Mosrie is an expressive and soulful southern folk-Americana singer-songwriter whose thoughtful, refined compositions are highlighted by her warm, crystalline voice. Although not too keen about the slow, sleepy ways of doing things in the small rural town in which she grew up, the melodies and imagery that emerged in her writing comes straight from the culture she once dismissed. Rich Warren of Chicago’s WFMT-FM describes Mosrie as “William Faulkner with a guitar.” Louise has been a winner in the prestigious Kerrville New Folk Competition and a “Falcon Ridge Most Wanted to Return” artist. Her latest release, 2014’s Lay It Down, was arranged and produced by Eberhardt.