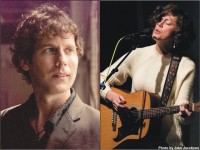 Touring singer-songwriters Rachael Kilgour and Jesse Terry share the bill during the monthly Hard Luck Café series at the Cinema Arts Centre (423 Park Avenue, Huntington) on Thursday, Nov. 15. The 8:30 p.m. concert in the cinema’s Sky Room will be preceded by an open mic at 7:30 p.m. Tickets are $15 ($10 for Cinema Arts Centre and Folk Music Society of Huntington members) and will be available at the door.

Rachael Kilgour is a passionate and engaging Minnesota-born and Boston-based performing artist whose songs merge the personal and political. Her sincere lyric-driven work has been called both brave and humane. A 2015 grand-prize winner of the esteemed international NewSong Music Performance & Songwriting Competition and a winner of the prestigious Kerrville New Folk Competition in 2017, she has performed at NYC’s Lincoln Center, The Kennedy Center in Washington, DC, and the ASCAP Music Café during the Sundance Film Festival in Park City, Utah.

“When Rachael performs, a force of nature erupts,” writes Richard Cuccaro in an Acoustic Live! in New York City and Beyond cover feature. “She unleashes a palpable torrent of passion, whether singing about social justice or a searing personal revelation….The missives from her heart will win yours.” For more information, visit www.rachaelkilgour.com.

A true musical journeyman, he has made it his mission to share his love of music fully and completely, without regard for shading his emotions or tempering his convictions. By his own definition, the Connecticut-based performing artist has never been a cautious individual, but rather one who finds inspiration and optimism in the solace and joy that making music brings him and which he can impart to others both through his recordings (five albums and an EP to date) and his live performances throughout the U.S., Europe, Greenland, and New Zealand. More information may be found online at www.jesseterrymusic.com.