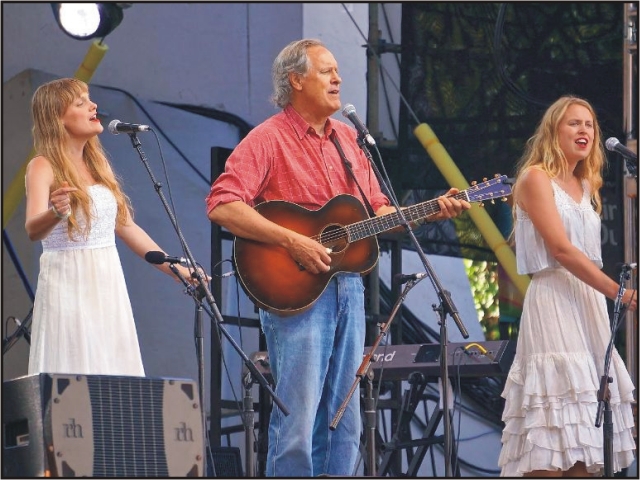 Purchase advance tickets for this event using Paypal or your major credit card.
- First select the ticket quantity and the ticket type (Member or NonMember).
- Note: If you require different ticket types (ie: 1 member + 1 nonmember ticket), please add one type & qty to the cart, return to the page, and add the second type & qty separately.

In the long, rich history of family groups in American roots music, the Chapins have a special place. Grammy Award-winning singer-songwriter Tom Chapin, who previously performed for FMSH a few years ago, returns to share the stage with The Chapin Sisters -- the singer-songwriter duo comprised of his daughters Lily and Abigail. In this rare joint performance, they will sing their own original and traditional songs, as well as classics by Tom’s brother and their uncle, the late Harry Chapin. Selections from their respective recent releases, At The Turning Point and Ferry Boat, will be featured during the evening.

Hailed as “one of the great personalities in contemporary folk music” by The New York Times, Tom Chapin’s illustrious career spans five decades, 26 albums and three Grammys. He has covered an incredible amount of creative ground – maintaining two long and productive parallel musical vocations, both as a respected contemporary folk artist and a pioneer in the field of children’s music. Earlier this year, Tom was named Best Male Artist in the 2018 International Acoustic Music Awards.

Making music that a critic for The New York Times lauded as “tantalizingly close to beauty,” The Chapin Sisters carry on a proud family musical legacy. Since 2005, the sisters have garnered critical acclaim by forging a distinctive musical imprint in which they “wed lilting voices, dynamically complex vocal harmonies, and folk-influenced melodies to dark, wryly sarcastic lyrical content,” notes Amazon.com in an editorial review.

Donations of canned and other non-perishable food items will be collected for Long Island Cares - The Harry Chapin Food Bank.