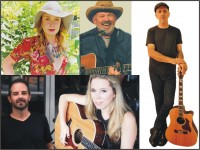 Steve, winner of the 2007 Long Island Blues Society’s Blues Challenge, is a native Long Islander. He has been a carpenter, high school English teacher, commercial shell fisherman, truck driver, landscape crew foreman, air traffic controller, union rep., and computer programmer (and those are just some of the jobs). “It hasn’t been dull”, as Ellen, his wife of 39 years, puts it. What he is now is one hell of a songwriter, guitarist, singer, and performer. Steve is a self-taught guitarist and has developed his own unique finger style combining driving rhythms with tasteful licks.

Born of Italian immigrants and union activists, JOE IADANZA understands the passionate struggle of the American dream. Recalling Springsteen, Leonard Cohen, and Cat Stevens, this Long Island native’s music is rooted in classic folk: honest and raw. Iadanza has been heralded for his deeply personal songwriting, and fluid, percussive guitar playing. He continues to work with artists as a producer and songwriting coach, including with Americana artist, Carolann Solebello on her newest release, “Shiver”; and on Spuyten Duyvil’s “The Social Music Hour, Vol. 1”, which was nominated by the folk community for an ‘Album of the Year’ award. Look for a string of new original singles, Including the just-released “Thunder Road” and “Wrecking Ball”. Joe will be on the road with solo and co-bill shows beginning this fall. http://www.JoeIadanza.com

Nico Padden is a one-woman folk-rock riot. Born and raised in a musician family in Farmingdale, NY, Nico was groomed from a young age for an operatic career. After graduating conservatory, she rejected the classical music path to forge on her own as a singer-songwriter. Her original music and voice have been compared to the likes of Brandi Carlile, Alanis Morisette, and Joni Mitchell.

Her catchy, heartfelt songs and fiery, soulful voice are crowd-pleasers everywhere she performs. A current resident of Queens, Nico has built up a supportive local New York following. She is currently touring the East Coast in support of her 2016 album entitled A Light in the Dark, which has had play on Folk Radio. Her song “White Flag,” has been featured on WFUV’s Sunday Supper show.

Cassandra House is an Indie-Folk singer & songwriter hailing from Long Island, NY. Her passionate instrumentation and introspective lyrics have been a crowd favorite for fans of original music on the island & across the U.S. Cassandra’s music has been described as comparable to the likes of Patty Griffin, Brandi Carlile & Kathleen Edwards.

Cassandra has been seen on stage with the likes of Amy Helm, Todd Schaeffer (of Railroad Earth), G.Love, Jen Chapin, Shannon McNally, Lucy Kaplansky, Andy Falco (of the Infamous Stringdusters) and Papadosio. Cassandra has played The Great South Bay Music Festival for 6 years (where she has shared a stage in the past with Railroad Earth, Colin Hay, Graham Nash, and Rusted Root), Falcon Ridge Folk Festival, Resonance Music Festival, Bradstock, The American Music Festival, and Brooklyn Bowl to rave reviews.

Her newest album, ‘The Roam’ is available on Spotify, Apple Music, iTunes, CD Baby & on the ‘STORE’ link on this website.

Born and raised in Johannesburg, South Africa, Toby has immersed himself in many genres of American Music while never leaving behind his roots in the rhythms and melodies of his homeland. His keen ear for intuitive arrangements is a hallmark of his writing and performance, and he has garnered a strong following on Long Island and in the tri-state area. He recently returned from his U.S tour of “One man’s struggle to find freedom for the rest of us – Journey From Johannesburg”.