Belle of the Fall + Kate Callahan 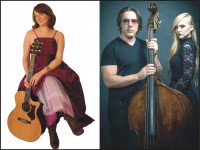 Connecticut-based artists Belle of the Fall and Kate Callahan share the bill during the monthly Hard Luck Café series at the Cinema Arts Centre (423 Park Avenue, Huntington) on Thursday, Dec. 20. Both acts showcased their talents during this summer’s Huntington Folk Festival. The 8:30 p.m. concert in the cinema’s Sky Room will be preceded by an open mic at 7:30 p.m. Tickets are $15 ($10 for Cinema Arts Centre and Folk Music Society of Huntington members) and will be available at the door.

Belle of the Fall is Tracy Walton and Julia Autumn Ford – an indie folk-rock pop alternative Americana duo. The two met when Walton produced Ford’s solo debut album in 2014 at his studio and spent the better part of the next year touring together as solo artists. They began to play on each other’s sets and sang harmonies together before becoming a duo in 2015. Walton’s weathered voice and upright bass complement Ford’s angelic vocals. Belle of the Fall has released two albums – Earthbound and Rise Up – both recorded at Walton’s On Deck Sound Studio, where Ford also now works — so when they are not touring or working on their own projects, they are working with other artists.

Kate Callahan was Connecticut’s official State Troubadour from 2016-2018, which afforded her the opportunity to travel and perform music throughout the state. She is among the most awarded singer-songwriters in her home state – having been named the Hartford Courant’s Woman of Character and Best Singer-Songwriter in the 2017 CT Now readers poll, among other honors. Her live performances feature soulful, optimistic and uplifting original music – including songs about the earth, gratitude, marriage, love, and spirit — plus select songs by Leonard Cohen and Bob Dylan. Callahan, who loves to use her voice to tell stories and weave anecdotes about the healing power of music throughout her concerts, also has a vocal empowerment coaching business. She recently released Triumph.