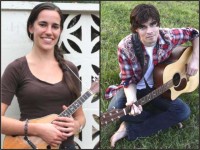 Brooklyn-based singer-songwriters Jean Rohe and Matt Nakoa will perform during the Folk Music Society of Huntington’s Hard Luck Café series at the Cinema Arts Centre (423 Park Avenue, Huntington, NY) on Thursday, June 18. The 8:30 p.m. concert in the Cinema’s Sky Room will be preceded by an open mic at 7:30 p.m. Tickets are $15 ($10 for Cinema Arts Centre and FMSH members). Both featured artists will be part of the “Most Wanted” Song Swap during this summer’s Falcon Ridge Folk Festival, having been selected by audience members from among 24 artists/acts who performed in its Emerging Artists Showcase last year.

Jean Rohe’s inviting performances of one-of-a-kind narrative songs, blending folk, jazz and Brazilian traditions, have entertained audiences throughout the United States and in Europe. Ranging from fantastical riffs on old folktales to autobiographical sojourns, Jean’s songs also deal artistically with matters of social concern and have earned recognition from both the ASCAP Foundation and the New York Songwriters Circle. Lead Me Home, Jean’s debut album, was followed by her latest release, Jean Rohe & the End of the World Show, a travelogue of original songs sung in several languages, that garnered three Independent Music Awards in 2014.

“What sets Jean Rohe apart are the suppleness of her voice, the integrity of her vision and the grace she shows in her wide-ranging journeys across the musical landscape, “ says John Platt, host of WFUV’s “Sunday Breakfast.” FMSH is pleased to welcome Jean back for her second Hard Luck Café appearance.

Matt Nakoa, a 2014 winner in the prestigious Kerrville New Folk Competition, spent his formative years on an upstate New York goat farm and once performed as a classical pianist. He began composing music as a teenager and won a scholarship to the Berklee College of Music in Boston, where he received top honors in songwriting and vocal performance. Matt’s engaging style and musical artistry have led him to an extensive touring schedule that includes both domestic and international engagements; he recently gave a concert at The White House and has performed shows throughout India.

On the heels of his 2012 pop-rock-styled debut album Light in the Dark, Matt’s most recent studio album, A Dozen Other Loves (2014), explores a primarily acoustic palette and has received extensive airplay on folk-oriented radio. His film scoring has been featured on Disney.com, while his piano music received favorable reviews in The New York Times and other publications.