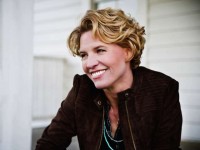 Catie Curtis is a Boston-based singer-songwriter who has toured the U.S. and Europe for more than 20 years — including several performances at The White House, at two Presidential Inaugural Balls, at Carnegie Hall, and with Lilith Fair. Dubbed a “folk-rock goddess” by The New Yorker, she’s released 13 albums, recorded a duet with Kris Kristofferson for his CD The Austin Sessions, and was the grand-prize winner in the 2006 International Songwriting Competition. Catie has also won a slew of Boston Music Awards and had songs featured in numerous films and TV shows.

Since 2012, Catie has been the producer of Voices United Concerts, organized to raise awareness and funds for Americans United for Separation of Church and State (AU). AU is a crucially important bi-partisan non-profit that lobbies, litigates and educates to protect against religious extremism – an issue Catie unequivocally supports. Voices United shows have presented a diverse lineup of performers with such greats as Sarah Silverman, Ani DiFranco, Dar Williams, Louis Black, Kate Clinton, John Gorka, Roy Zimmerman and Melissa Ferrick, to name just a few. The first season, in 2012, presented 75 house concerts (one in every state) over one weekend, and plans are now well underway for the 2015 Voices United Concert schedule.

When Maine-native Catie Curtis is not writing, recording, touring or producing concerts, she also officiates and performs at fans’ weddings (having received her ordination online in 2011), teaches at song schools around the country, leads high school songwriting workshops, speaks on diversity, and runs a songwriter retreat in Maine every summer called “Catie at the Cove.”