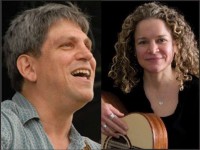 Lara Herscovitch is an engaging contemporary singer-songwriter with a voice “clear and smooth, like expensive liquor” (Northeast Performer). Her music blends acoustic folk with pop, jazz, blues and Latin influences. Hailed as “a remarkable performer” on WSHU’s Profiles in Folk, Lara has showcased at the International Folk Alliance Conference, served as the official Connecticut State Troubadour (2010-2012), and performed on A Prairie Home Companion and in John Platt’s “On Your Radar” series in NYC. Trained as a policy social worker, Lara has worked on behalf of disadvantaged populations in Asia, Latin America and the U.S. Small wonder, then, that echoes of the global themes of equity and social justice resonate throughout her music. Lara has recorded five studio albums, including her most recent release – Four Wise Monkeys.

Josh Joffen is a Long Island-based singer-songwriter whose songs are, by turns, rousing, funny, poetic and insightful — blending modern and traditional folk and jazz influences with a rich palette of guitar voicings and open tunings. Josh is a two-time winner of the prestigious Kerrville New Folk Competition and a 2011 winner in the Great American Song Contest His songs have appeared in Fast Folk Musical Magazine and Sing Out! and have been recorded by such artists as Gathering Time and Mike Agranoff. With his warm, welcoming stage presence, Josh is equally at home before large and intimate audiences. He has performed at numerous clubs, coffeehouses and festivals. His most recent album, Postcard From Antigua, is a lyrical travelogue with songs set in locales from the Caribbean and the Middle East to his native New York.

Noting that “Lara and Josh were the first artists to perform in the Hard Luck Café series when it moved to the Cinema Arts Centre in April 2011,” FMSH President Michael Kornfeld said: “We are thrilled to welcome them both back for this return engagement.”