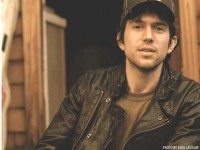 David Jacobs-Strain is a consummate fingerstyle and slide guitarist and a song poet from Oregon who brings an old-school sensibility to a new generation of blues and roots.

Although he plays in the blues tradition, David Jacobs-Strain isn’t from it. In his solo performances, you’ll hear echoes of Skip James, Charlie Patton and Tommy Johnson, and, perhaps, a song by Fred McDowell or Robert Johnson. But Jacobs-Strain is a modern roots musician, singer and songwriter. “”I come from the language of the country blues,” he notes, “but it’s important not to silence other influences.

David is known for his virtuosity and spirit of emotional abandon; his live shows move from humorous, subversive blues to delicate balladry, and then swing back to swampy rock and roll. It’s a range that ties him to his own generation and to guitar-slinger troubadours like Johnson and Jackson Browne. Says Jacobs-Strain: “I try to make art that you can dance to, but I love that darker place where, in my mind, Skip James, Nick Drake and, maybe, Elliot Smith blur together… I’m fascinated by the way that rural blues inscribes movement and transience. The music that frees a singer keeps them on the run; there’s a crossroads where a thing can be enchanting but dangerous; damaging but beautiful.”

Jacobs-Strain grew up in Eugene, Oregon, in a community that was centered on cultural change and environmentalism. He sees a distinct connection between the principles embodied in his upbringing and the democracy of the blues. “I’m really into handmade culture and real people making real music,” he notes. “The voice. One guitar. Even at their simplest, the blues have always been a vehicle for expressing your own situation – whether as an individual or a community. There’s such power in that.”

Jacobs-Strain began playing on street corners and at farmers’ markets as a teenager he bought his first guitar with the quarters he saved up. Before he dropped out of Stanford to play full-time, he had already appeared at festivals across the country and was often billed as a blues prodigy – but he had to fight to avoid being a novelty act. “I wanted to tell new stories; it just wasn’t enough to relive the feelings in other people’s music,” he recalls.

David Jacobs-Strain has appeared at festivals from British Columbia to Australia – including such notable ones as Bumbershoot, Merlefest, Philadelphia Folk Festival and Telluride Blues Festival. He’s also taught at Jorma Kaukonen’s Fur Peace Ranch and has previously performed for the Folk Music Society of Huntington’s First Saturday Concerts series.