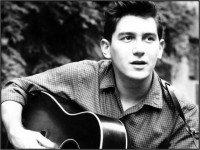 Phil Ochs was an American troubadour who passionately believed that he and his music could help change the world. Many of his songs became anthems for the anti-war movement during the turbulent 1960s, and his music continues to influence and inspire songwriters today – 40 years after his death. Among his best-known songs are Changes, I Ain’t Marching Anymore, Small Circle of Friends, There But For Fortune, and When I’m Gone.

screenings of the documentary Phil Ochs: There But For Fortune, during which Sonny Ochs, Phil’s sister, shared some thoughts on her brother and on the film.

Since 1983, Sonny has been producing Phil Ochs Song Nights that feature talented artists who perform both Phil’s songs and their own to show that the art of topical songwriting is still alive and well. FMSH has presented a couple of these and is delighted to welcome Sonny Ochs back to host another one.

Performing on March 5 will be Greg Greenway and Pat Wictor of the folk harmony trio Brother Sun, along with Kim & Reggie Harris, Colleen Kattau and Sharon Katz.