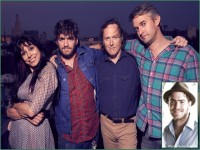 Greg Cornell and the Cornell Brothers (siblings in song, not in fact) is a Brooklyn-based roots music quartet featuring fiddle/mandolin, guitar, bass and percussion, along with tight three-part harmonies, that has played venues in New York, festivals and club dates in New England, and four shows at the 2015 Sundance Film Festival in Utah. The group’s musical repertoire features a blend of bluegrass, country, old-time and blues.

David Moss is a Brooklyn-based singer-songwriter and a 2011 winner of the prestigious Grassy Hill Kerrville New Folk Competition.

Moss hails from Peoria, IL and began his musical journey playing cello and singing in various formats at a very young age. After earning a degree in cello performance from the University of Illinois (Urbana-Champaign), he moved to Austin, TX in 2007 and immersed himself in the music scene there for a number of years before relocating to New York.

Besides performing as a solo artist and with his twin brother, Adam, he continues his cello career playing and composing with The Blue Hit, Ana Egge, Moishe Circus and Satellite Ballet, among others. Moss’ song “Jerusalem,” penned in 2010, was featured on “Democracy Now” in 2014 – the same year that he released an album entitled Songs for Willoughby. (www.mosssongs.com)