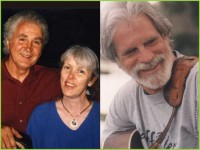 Steve Gillette & Cindy Mangsen have been performing together for 25 years – sharing their love of traditional music, along with a bevy of original songs. Their performances are filled with rich harmony, compelling songs and a good dose of humor.

Such musical luminaries as Garth Brooks, John Denver, Waylon Jennings, Josh Ritter, Linda Ronstadt and Tammy Wynette have covered Steve’s songs. Yet his own versions – featuring his warm baritone voice and unique fingerpicking guitar style (using a flat-pick and two fingers) – are among the best.

Accompanying herself on guitar, banjo, concertina, or mountain dulcimer, Cindy is known for her compelling interpretations of traditional ballads, as well as for her own writing and her ear for harmony. Her latest solo album, Cat Tales, is devoted to “songs of the feline persuasion.”

Jack Williams is a southern American troubadour who has earned critical acclaim for his fingerstyle guitar picking, expressive and resonant voice, and prowess as a songwriter and storyteller. A much sought-after artist on the contemporary folk and acoustic music scene, Jack performs an eclectic blend of musical styles.

“You can hear both the white and black musical traditions in his writing,” says Phil Shapiro, host of Bound for Glory on Ithaca, NY’s WVBR-FM. “You can hear country; you can hear blues; you can hear jazz. He’s a poet who knows how to write simply. And he’s a remarkable, magical performer with graceful good humor and a hot guitar style.” Citing his artistry as “nothing short of amazing,” Rich Warren, host of the nationally syndicated The Midnight Special, originating from Chicago’s WFMT-FM, hails Jack for his “dazzling picking, expressive voice [and] unique and interesting songs.” And Tom Paxton, whom Jack has accompanied many times, refers to him as “one of my all-time favorite pickers.”