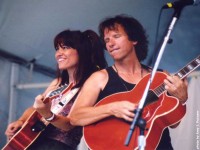 The Kennedys are a cutting-edge hip folk couple who wield plugged-in acoustic guitars. However, local audiences — like those across the nation and overseas — have quickly figured out that Pete and Maura Kennedy defy the stereotypical notion of folk. Over the course of more than a dozen CDs and countless touring miles since 1995, the New York City-based husband-and-wife singer-songwriter duo has carved out its own niche in the indie music scene – somewhere between pop and acoustic rock, not too loud but brimming with super-sized energy. With “gorgeous boy-girl harmonies and catchy tunes” (Entertainment Weekly), The Kennedys can always be counted on to bring an exuberant mixture of folk, rock, country and pop.

Last year, Pete and Maura marked 20 years as both a married couple and musical duo. During that time, they have released 15 albums – including three in 2015. They’ve spent more than two decades as touring musicians – both on their own and as members of Nanci Griffith’s Blue Moon Orchestra. The Kennedys have graced the stage at New York’s Carnegie Hall and London’s Royal Albert Hall; and entertained throngs of people at the Falcon Ridge, Newport and Philadelphia Folk Festivals with their own songs and choice covers.

“Pete and Maura have performed for the Folk Music Society of Huntington a number of times and always draw an enthusiastic response from our audiences,” said Michael Kornfeld, the organization’s president. “We are delighted to welcome them back.”