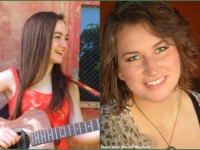 Annika Bennett is an award-winning singer-songwriter and multi-instrumentalist. Although she’s only 17, Annika’s songs reflect a level of craftsmanship and her lyrics a depth of wisdom that belie her youth. They are definitely not about teenage angst. She has written scores of songs and performed extensively throughout the New York metropolitan area.

Last year, Annika received ASCAP’s prestigious Robert Allen Award for Excellence in Songwriting and was the Audience Choice winner of WNYC Radio’s Battle of the Boroughs (Queens) competition. A semi-finalist in the 2014 International Songwriting Competition, Annika also participated in RealWomen RealSongs – a group of female artists who each wrote a prompted song a week during 2014. Winner of the 2015 Your Big Break Contest sponsored by the Gold Coast Arts Center, Annika also closed out the juried Emerging Artists Showcase during this summer’s Falcon Ridge Folk Festival.

Kirsten Maxwell is a folk music “triple threat.” Her talent is equal parts singer, performer, and songwriter. Often compared to timeless singers like Joan Baez, Joni Mitchell, and Judy Collins, the 23-year-old is unlike any young female singer of her generation.

Over the past year, Kirsten has quickly made a name for herself on the Long Island music scene. Now venturing out into New England, she won a songwriting contest sponsored by the Rhode Island Songwriters Association (RISA) — taking the prize with two original songs off of her debut album, Crimson.

Kirsten began singing and performing at age 5 as part of the Amato Opera Children’s Chorus. She continued classical vocal studies at The Crane School of Music, where she developed captivating control over an otherwise naturally passionate voice. Kirsten graduated from SUNY Geneseo last year with a BA in Creative Writing, which enhanced her innate songwriting abilities.