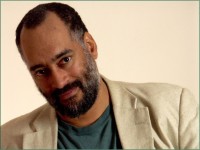 Vance Gilbert is not merely a talented singer-songwriter, but a consummate entertainer who possesses “the voice of an angel, the wit of a devil, and the guitar playing of a god (Fort Worth Star-Telegram).

With his engaging personality, wonderful biting wit, soulful and resonant tenor voice, and solid songwriting and performance skills, Vance Gilbert has been impressing audiences since emerging on the Northeast singer-songwriter scene during the early 1990s.

A former multicultural arts teacher and jazz singer from the Philadelphia suburbs, he began playing open mics in the Boston area and soon attracted the attention of singer-songwriter Shawn Colvin. She invited him to be a special guest on a 1992 tour in support of her Fat City album. Gilbert has since released many albums of his own, toured extensively, and opened tours for the late comedian George Carlin for two years.

“His catchy, pop-friendly melodies support keenly crafted, hard-hitting lyrics. His guitar is supple, his milk-warm tenor honest and gently acrobatic… He does not duck hard truths and never succumbs to the temptation to tie his points up in neat platitudes or truth-isms. He writes powerfully and uncompromisingly about the wrenching separation suffered by single parents, the tug between love’s desire and its demands, and the bitterness of being nonwhite in this Eurocentric culture… He is that rare performer for whom people lean forward in their seats as eagerly between songs as during them.” (The Boston Globe)