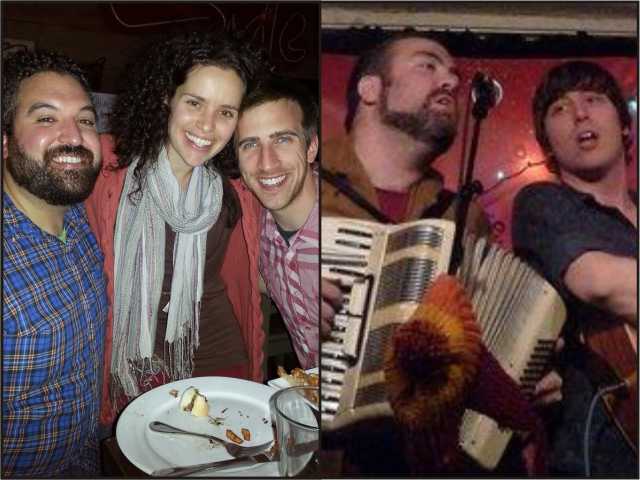 The New Students are a Brooklyn-based band performing both original and traditional material in tight three-part harmony and an eclectic blend of folk, roots, alternative and Americana traditions. Members of the group hail from Long Island and Brooklyn, and include singer/songwriters and multi-instrumentalists Justin Flagg and Matt Gelfer, vocalist Briana Carlson-Goodman, bassist Sam Gelfer and percussionist Jason Rosoff. With one foot in the 21st century and the other planted firmly in the soil of American folk music, The New Students always deliver an animated and heartfelt performance featuring skillful acoustic instrumentation, compelling lyrics and quirky humor.
The New Students formed in 2009 when Justin Flagg and Matt Gelfer, who’ve been playing music together since their childhood in Brookhaven hamlet, were joined by Broadway veteran Briana Carlson-Goodman. The addition of Sam Gelfer on upright bass and Jason Rosoff on drums rounded out the band, whose influences run the gamut of 20th century folk, bluegrass country and pop from Woody Guthrie and Pete Seeger to The Band, Allison Kraus and They Might Be Giants. Their latest recording, When the West Wind Blows, was released in 2014.

Pesky J. Nixon is a Boston-based Americana band whose unique brand of bombastic yet infectious energy, combined with their rich harmonies and musical versatility, draws the audience into their world of songs and stories. Members of PJN include Ethan Scott Baird (guitar and vocals), Jake Bush (accordion, harmonica, piano and vocals), Dan Carp (percussion and vocals) and Kara Kulpa (mandolin, fiddle and vocals). Drawing from influences that range from contemporary urban balladeers and rowdy Southern bluegrass to the wry wit of New England’s localized folk scenes, PJN creates an inviting yet challenging musical atmosphere with compelling vocal harmonies backed by instrumentation that includes zydeco-style accordion, virtuosic mandolin and a variety of tribal percussion instruments.
Performing their combination of original material, familiar songs and trademark stage banter up and down the East Coast for the past several years, PJN was chosen one of the Falcon Ridge Folk Festival’s “Most Wanted to Return” artists in 2012 and had a formal showcase at the Northeast Regional Folk Alliance Conference in 2012. Their latest album, Red Ducks, was released in 2012 and debuted at #8 on folk radio, according to the Folk DJ Listserv.