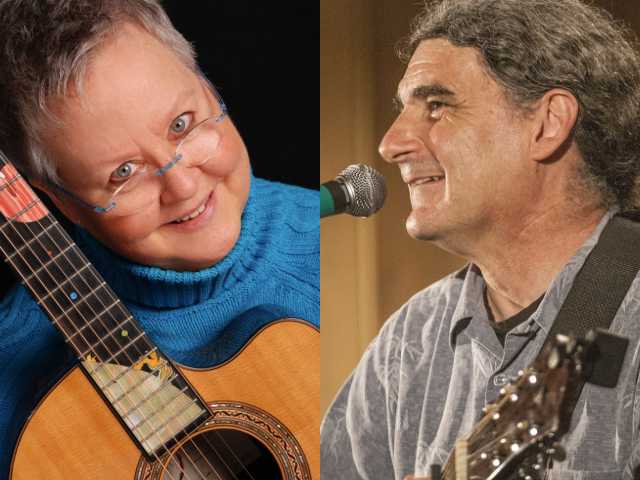 Hailed by The Boston Globe as “two of the funniest entertainers on today’s music scene,” veteran performers Christine Lavin and Don White    have brought their unique brand of clean and hilarious musical comedy to audiences across the U.S. since 2008 — proving night after night that comedy can be smart, friendly, and breathtakingly funny without being vulgar or pejorative.

Since emerging from the NYC singer-songwriter scene in the late 1980s, Christine Lavin has established herself as an entertaining tour de force. Quick on her feet, witty, insightful and engaging, she remains one of the most popular and respected performers in the genre. Christine has also been at the forefront of finding and promoting talented new artists.

Don White is the latest artist whom she has championed. “He’s such an original; I sometimes call him a ‘blue collar intellectual,’ ” says Christine. A product of the rich Boston arts scene of the 1990s, Don developed his songwriter/performer chops at Club Passim and Olde Vienna Kaffehaus while honing his comedic skills at Catch a Rising Star in Harvard Square. These experiences — along with his immersion in the Boston spoken word scene — combine to make Don one of the few performers who brings a comic’s wit and a poet’s heart to his songs and stories.