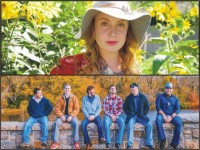 Quarter Horse, a six-member ensemble, has been rapidly building a following on LI and beyond. Elements of folk, rock, alternative, country, blues, and jazz are all part of its Americana sound.

More information on the featured artists, as well as music and videos, may be found on their respective websites: www.cassandrahouse.net and www.quarterhorseband.com .

Note: Tickets to this summer’s Falcon Ridge Folk Festival also will be raffled off during this concert.