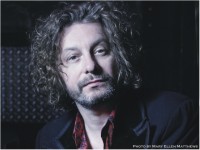 Purchase advance tickets for this event using Paypal or your major credit card.
– First select the ticket quantity and the ticket type (Member or NonMember).
– Note: If you require different ticket types (ie: 1 member + 1 nonmember ticket), please add one type & qty to the cart, return to the page, and add the second type & qty separately.

“James Maddock possesses the kind of lived-in, craggy voice that would sound authoritative if he were singing the sports pages,” notes Relix. “Fortunately, he doesn’t need to do that because his compositional skills are a match for his delivery.” His consistency as a recording artist and a captivating live performer has attracted a devoted fan-base.

A gifted songwriter, raspy voiced crooner and guitarist, Maddock first gained attention with the band Wood, whose debut recording, Songs from Stamford Hill, was featured prominently on the TV show Dawson’s Creek. After fronting the band, he moved from England to New York City 15 years ago. His 2009 release Sunrise on Avenue C won a New York Music Award for Best Americana Album, while its follow-up, Wake Up And Dream, ranked among the top albums of 2011 in WFUV’s Listener Poll.

Maddock has earned the respect of masterful songwriters Bruce Springsteen and Willie Nile, with whom he’s also performed. He has been a guest on major national TV shows, an artist in residence at Rockwood Music Hall (the Manhattan club at which he also recorded a live album) and had a coveted official showcase at this year’s Folk Alliance International Conference.

Just as he is elegantly spare in conveying his songs and sentiments in the most direct possible way on some of his albums, so too will Maddock do that as he graces our stage for a second time after previously wowing a large FMSH audience in 2013.