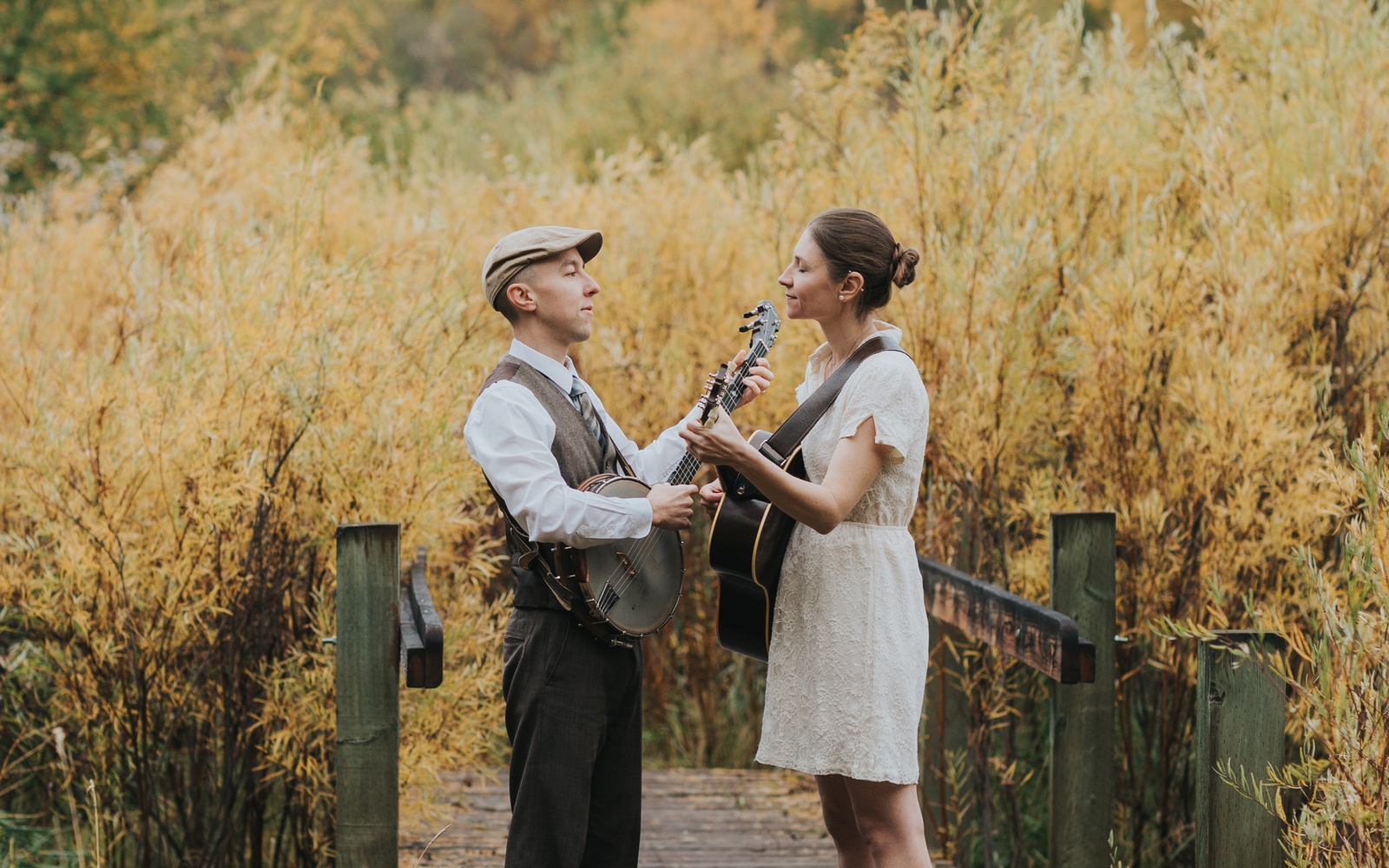 Ordinary Elephant, a husband-and-wife duo (Crystal & Pete Damore) that was named Artist of the Year in the 2017 International Folk Music Awards presented by Folk Alliance International, will share their emotionally powerful and vulnerable songs during the Folk Music Society of Huntington’s virtual First Saturday Concert series on May 1 from 8-9:15 p.m. EDT. Since the ongoing pandemic prevents the nonprofit organization from hosting in-person concerts, this one will be live-streamed via Crowdcast. Advance registration is required for this concert, and a link to view it will be sent to your email address.

Click here to register for the concert: http://ordinaryelephant.net/fmsh . Don’t wait until the night of the concert to register. Please register in advance. The minimum registration cost is $0 and you will be able to tip the performers during or after the show.

What Others Are Saying About Ordinary Elephant:

“There is nothing at all ordinary about this elephant. They are smack dab in the tradition that I have always loved but have both (all four?) feet in the 21st century. This is rich ground. Listen!” – Tom Paxton

“Keep kind all that rises from your chest to your tongue. Don’t ever let your words undo the work you’ve done,” sings Crystal Damore on “Worth the Weight,” a song that beats at the heart of Ordinary Elephant’s potent new album, Honest. In the song, it’s a two-line enjoinder from an adult to a kid. In life, though, it’s a mission statement for ourselves as much as for others. And the work that Crystal, along with her husband Pete, has done on Honest is both filled with kindness and worthy of praise.

Interestingly, if not ironically, in order to accomplish this new work, Crystal and Pete had to set aside the work they’d done previously, as a veterinary cardiologist and a computer programmer, respectively. The two met at an open mic in College Station, Texas, in 2009 and soon moved to Houston together. With her on acoustic guitar/lead vocals and him on clawhammer banjo/harmony vocals, the work of music continued on the side as both had full-time jobs, until they threw all caution to the wind and hit the road in an RV.

Leaving the stability of a day job and the security of a career didn’t come easily for Crystal. “It took a lot of time — and help from Pete — for me to get to the point that I was okay with leaving the career I spent my whole life in school working toward, to the degree that I was leaving it,” she admits, adding, “to be okay with the fact that it may not be what other people want, but it was what I needed, and that was the important part.”

Bitten by the creative bug at an early age, Crystal had set most of that aside to focus on school and work: “Living on the road, before doing music full-time, gave my creative side the breathing room it need to come back out.”

And, boy, has it ever come out now that they’ve both committed fully to Ordinary Elephant. In song after Honest song, the Damores take on what it means to follow your heart and eschew all the expectations, assumptions, and limitations projected upon you by others. They also use their own life experience to point out that the “safe” route can be anything but safe, as they do in “Rust Right Through.”

“I had a safe job and was on a safe life trajectory, financially,” Crystal says, “but those things were like a safety rail you reach for — a habit, a comfortable familiarity… something you’re expected to reach for. I was letting those things hold me up instead of learning to stand on my own. And one day, down the road, I would retire, and that job and those people who I thought I needed to please, would fall away, and I’d be left with me, not having lived the life I truly wanted or felt called to. That is not safe to my well-being.”

Another track that takes aim at playing it safe is the spirited bounce of “Jenny & James.” It’s the story of an interracial couple, though, really, it’s the story of any non-traditional couple targeted with shunning and shaming for being in love. As Crystal notes, “The ‘safe’ route of pairing up with someone of your same race and opposite gender is not safe to the well-being of many.”

The choices we make are not always easy or safe, but they are important. The songs on Honest speak, again and again, to being our truest, best selves, no matter who we are or where we come from. Indeed, every of us has a heritage, a legacy, a story, of which we are a part, for better and for worse. Each moment and memory a lesson leading us to who we will be.

The album’s spunky opener, “I Come From,” looks back at the things in our upbringing that are worth holding on to. The more sober “Scars We Keep,” on the other hand, tosses out the things that must be cast aside. In it, Crystal sings, “These times are hard, and it’s harder to heal, when where you were born decides what you fear. It’s time to be a brother, not my father’s son. I was born to be a bigot, but that don’t mean that I am one.”

As Pete explains, “Detangling tradition from any particular negative aspect is complicated, and sometimes impossible. But it’s necessary to change the tradition for it to live on and, hopefully, preserve its core as our culture tries to correct its failings.”

Pete grew up in Austin, Texas, in a big Italian family who gathered for big Italian meals, and he’s quick to admit that we all live in bubbles of our own making or choosing. “I can only imagine growing up in a toxic environment,” he offers. “Without the perspective gained from travel and experiencing other cultures, it’s nearly impossible to realize how toxic your world actually is. I can’t fault anybody not overcoming. I’m not in their shoes. I know I can’t change them by telling them they’re wrong, but I do know that people can change when they see new things.”

People can also change when they hear new things, as a fan did when Ordinary Elephant played “Scars We Keep” on the main stage at Kerrville Folk Festival in 2018. Around 2 am, a man walked up to them in the campground, tears in his eyes, and said, “I want to thank you for that song you did tonight … You changed my point of view.” Their response: “That is why we do this. Songs speak, and they can heal.”

Songs can also draw our attention to people and problems that we might not otherwise notice, as in “The War,” which takes on both the travesty of what war does to service members and the tragedy of what society does to returning veterans. It also connects the dots between different kinds of trauma and loss. For the song’s protagonist, the war never ended.

“It caused him to lose his significant other, his home, his ability to maintain a job, and drove him to become an alcoholic,” Crystal says of the character. “The narrator represents the majority of the population, in that he does not know, first-hand, the experience of war, but the story shows him having compassion for this veteran and understanding that some choices are made for you and this can lead to an inability to make good choices for yourself down the line.”

Much like Patty Griffin and Gillian Welch, taking on the male perspective as a female singer/songwriter is something that Crystal does with ease and equanimity, though the reverse is not something that happens very often. Pete theorizes that, “In a historically male-dominated world, there’s not been a lot of practice on the male side of idolizing women, or even being encouraged to empathize with their situations. Also, the expectation for men to be masculine is tightly woven through our culture and the everyday lives of men. A hesitation, conscious or not, would certainly present itself before performing a song on a big stage that’s overtly from a female perspective, especially for a man who’s not very secure.”

For Crystal, though, it’s just about telling the story in the truest, kindest way. “I think part of it could also have to do with empathy,” she says, adding, “and empathy can take the form of telling someone else’s story in song, no matter what gender that person is.”

Which brings us back to “Worth the Weight” and its stunning chorus: “You will wonder if it’s worth the weight, the worry that wears you down. Half your life spent figuring out how to make the other half count.” Honest is worth so much more than its weight, and Ordinary Elephant makes every kind word count as it rises from their chests to their tongues.