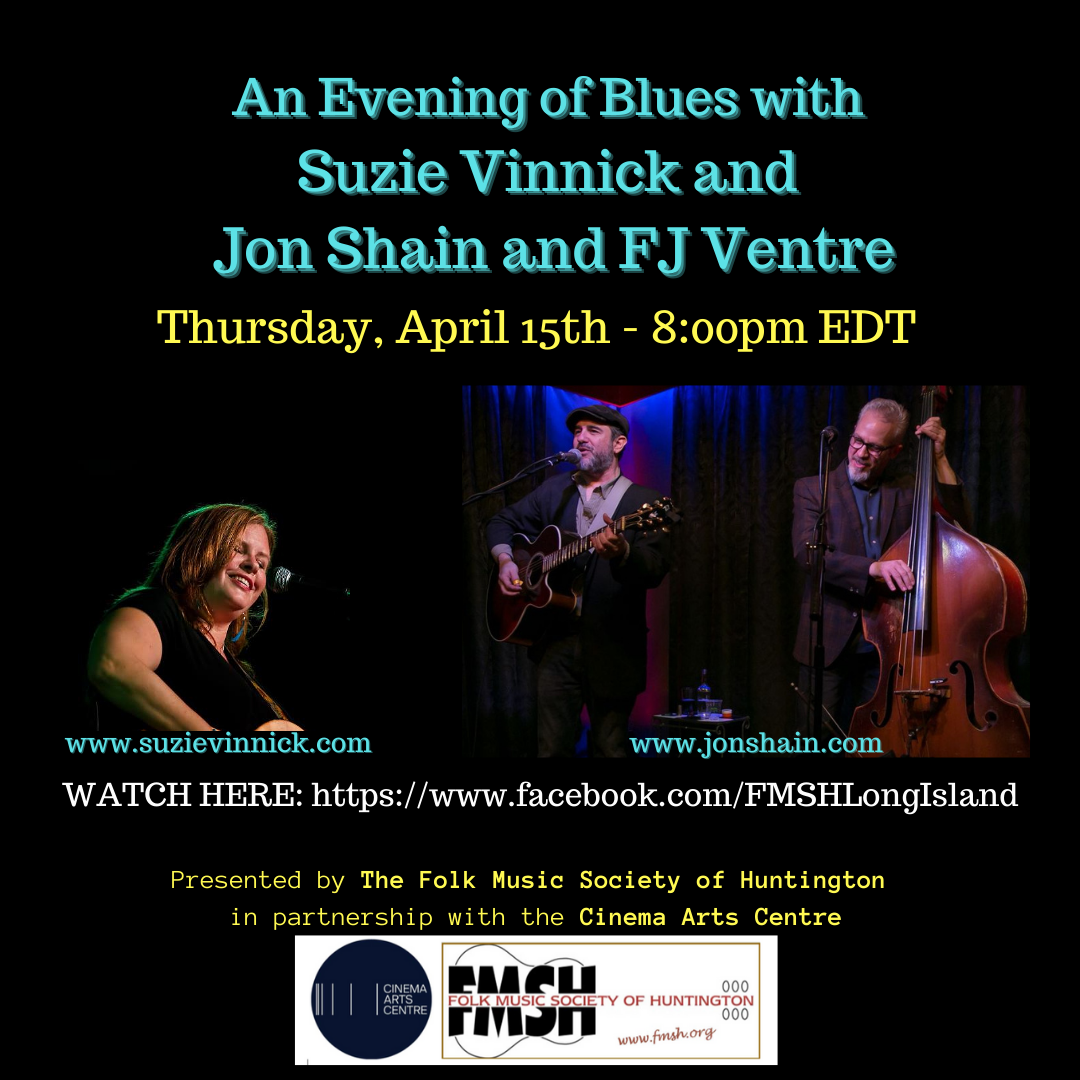 “Although the COVID-19 pandemic prevents the Folk Music Society of Huntington from hosting in-person concerts now, our board of directors recognizes the importance of music in these challenging times and believes that the show must go on-line,” said Michael Kornfeld, the nonprofit organization’s board president. He noted that although there is no admission charge for the concert, tips for the artists — who have lost many gigs and are unable to tour due to the ongoing health crisis — would be most appreciated.

Jon & FJ and Suzie will be splitting any amounts that are contributed: to these virtual tip jars:
PayPal: flyinrex@jonshain.com and Venmo: @Jon_Shain. Information about online tipping will also appear on your screens during the concert.

Suzie Vinnick – a Saskatchewan native transplanted to the Niagara region of Ontario, Canada – is the proud owner of a gorgeous voice, impressive guitar and bass chops, and an engagingly candid performance style. In addition to winning 10 Maple Blues Awards, she is the recipient of a Canadian Folk Music Award, a two-time winner in in the blues category of the International Songwriting Competition, and is a three-time Juno nominee. Earlier in her career, she received the 2012 CBC Blues Great Canadian Blues Award and was named the 2012 SiriusXM Canada Blues Artist of the Year. Most recently, she received the Saskatchewan Jazz Festival 2019 Special Recognition Award.

Jon Shain, a Durham, North Carolina-based singer-songwriter and guitarist, is the 2019 International Blues Challenge winner in the solo duo category. Shain had the good fortune to learn directly from a number of NC’s older blues players, and became a member of Big Boy Henry’s backing band. He got his start playing his own music with NC roots rockers Flyin’ Mice. Jon was a finalist (along with FJ) in the 2009 International Blues Challenge in Memphis and the 2008 and 2018 winner of the Triangle Blues Society’s Blues Challenge and 2006 winner of NC’s Indy award for Best Folk Act. Besides performing and recording, Jon teaches Piedmont blues guitar.

FJ Ventre and Jon began playing music together in 1982 when they met in high school. FJ went on to University of Massachusetts-Lowell, earning a B.A. in Music Performance and Sound Recording. He remained in the Boston area, performing in the city’s vibrant music scene. Since relocating to Chapel Hill, NC in 2000, FJ has performed with his own group, The Swang Brothers, as well as most of the Triangle’s roots acts. In addition to playing bass as a sideman, he spends his time behind the mixing board, engineering at his own Good Luck Studio. With Jon, they have become sought-after producers in the folk/Americana genre and have produced several charting Folk albums over the last few years.

Sometimes I Think I Can Fly – http://youtu.be/CRtOWFDAsBU