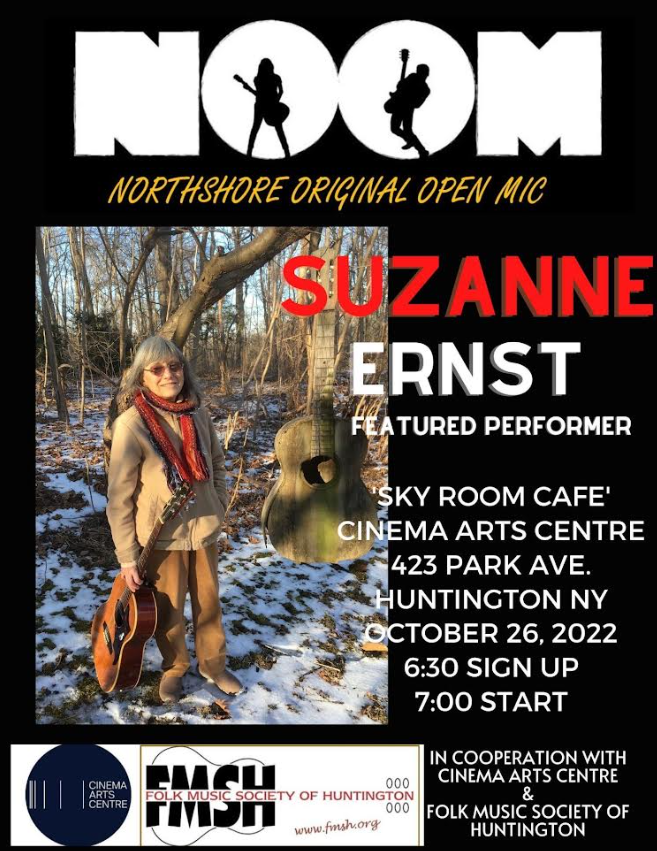 The Folk Music Society of Huntington joins with the Cinema Arts Centre in presenting the Northshore Original Open Mic (NOOM) three Wednesday nights each month. The open mic series, held in the Cinema’s Sky Room (423 Park Avenue, Huntington, NY), is set for 7:00pm, with open mic sign-up beginning at 6:30pm. Although it is free to attend, donations will be sought and gratefully accepted.

“It’s our pleasure to continue the ever-deepening partnership between the Cinema Arts Centre and two pillars of Long Island music scene – the Folk Music Society of Huntington and NorthShore Original Open Mic (NOOM),” said Dylan Skolnick, co-director of the Cinema Arts Centre. “The Folk Music Society of Huntington’s monthly Hard Luck Café series has been a mainstay of our programming for many years, bringing some of the country’s best folk music performers to dedicated folk fans here in Huntington. With the introduction of a weekly open mic night, we are delighted to offer even more opportunities for music lovers and artists to come together, as well as a space where seasoned performers can try out their newest original pieces and where up-and-coming musicians can get used to performing for a crowd,” Skolnick added.

Although the COVID-19 pandemic precluded NOOM from taking place in-person since March 2020, songwriter Richard Parr has been livestreaming the open mic every week since then and is also playing a major role now that it has resumed in-person. “We invite singer-songwriters of varying skill levels and those who love live music, to gather at the Cinema Arts Centre to listen to songwriters, dedicated to the craft of writing and singing their songs, play and talk about their original music in an environment of goodwill and open-mindedness,” said Tobias. He noted that each NOOM will also include a featured 20-minute performance by a known/emerging local or touring songwriter starting at around 8:00pm.  “I am very excited to be a part of this,” he said.

Affording local artists opportunities to share their talents with appreciative audiences in an intimate listening room atmosphere was the initial impetus behind the nonprofit presenting organization’s Hard Luck Café concert series many years ago, Kornfeld noted. That series now features a mix of local, regional and national touring artists. The Cinema Arts Centre has partnered with the Folk Music Society of Huntington and hosted the monthly Hard Luck Café concerts in its Sky Room for more than a decade.