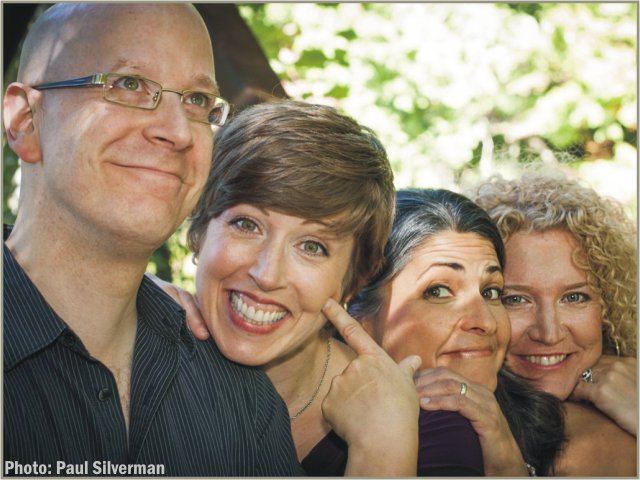 The monthly Hard Luck Café concert series co-presented by the Folk Music Society of Huntington and the Cinema Arts Centre in the Cinema’s Sky Room (423 Park Avenue, Huntington) resumes on Wednesday, October 19, from 7-10pm, and will take place on the third Wednesday of each month.

October’s featured act is No Fuss and Feathers — the “heck-of-a-good-time” collaboration hatched by Catherine Miles & Jay Mafale, Karyn Oliver, and Carolann Solebello. Shaken or stirred, NFF serves up a dynamic, cohesive cocktail of delicious harmonies, infectious rhythm, and spontaneous hilarity — with award-winning songwriting always present on stage. Individually, the four are nationally touring performers who have charted at the top of folk and Americana radio and appeared at some of the nation’s most respected music festivals. Collectively, they are an incorrigible bunch of musical co-conspirators bent on giving their audience an unforgettable show.

Sometimes referred to as a modern folk quartet, No Fuss and Feathers is truly a mix of the styles of the three songwriting entities: pop-infused, literate folk; bluesy, country-tinged acoustic; and Brooklyn-edged-Americana. For more information and to view a few performance videos, visit: http://nofussandfeathers.com

An open mic precedes the concert.  Tickets are $15 for FMSH/Cinema Arts Centre members and $20 for non-members, and can be purchased online at http://cinemaartscentre.org or at the Cinema Arts Centre box office now through the evening of the event.