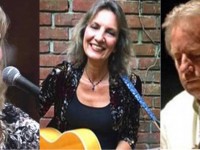 Annie Mark has shared her country-tinged Americana-roots music with audiences around the U.S. ad Ireland. A New York native, she moved to the South at age 10, where upon hearing the music of the Carter Family and Johnny Cash, she nurtured a life-long love of traditional country music and songs that convey slice-of-life stories about people’s lives with a heartfelt simplicity.

Inspired by such singer-songwriters as Patti Griffin, Julie Miller, Nanci Griffith, Mary Gauthier, Leonard Cohen, and Bob Dylan, Mark’s songs explore life’s journey and the universal themes of love and loss, struggles and triumphs, shadows and light — with a little humor thrown in. Accompanied by strong and tender acoustic guitar-playing, her richly textured voice runs the entire emotional spectrum — sometimes velvety smooth, at other times raspy and raw with a little torch and twang thrown in.

A gifted singer-songwriter and finger-style guitarist, James O’Malley has been a mainstay on the Long Island folk scene for years. He writes knowingly of life’s foibles, triumphs and defeats, and delivers his songs in a gentle, subtle, whispering tenor that draws his listeners in.

Considered by many to be a consummate songwriter, whose songs are universal and often feature subtle humor, O’Malley is a two-time finalist in the Plowshares Songwriting Contest. His songs often take listeners on an emotional journey exploring family, relationships, human nature and the contemplation of life’s choices. Critics have hailed him for his warm melodies, story-telling abilities and his way of charming audiences. O’Malley’s latest album, #4, was produced by Pete Kennedy and features news songs along with a couple of classics.

Randa — who cites Hank Williams, Patsy Cline, Neil Young and Linda Ronstadt among her musical heroes and heroines, recently recorded and released her solo debut recording, My Country — a mix of commentaries on relationships as well as on the state of our country and the world. Topics include celebrating freedom, waking up to relationships that can never be, remembering that fear closes the heart while love opens it, recognizing that there are good sides and bad sides to repeating stories, and the excitement and anticipation of finally going home — the place where all hearts are united.