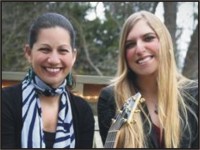 Joan & Joni is a tribute to Joan Baez and Joni Mitchell performed by singer-songwriters Allison Shapira and Kipyn Martin. In a musical journey from the 1960s to today, Allison and Kipyn demonstrate the effect Joan and Joni have had on their own musical development as modern musicians. Allison Shapira is a recovering opera singer who recently found her authentic voice as a folksinger and songwriter. Kipyn Martin is an award-winning Americana singer-songwriter whose roots sink into the banks of the Shenandoah River.

Allison and Kipyn met during the Northeast Regional Folk Alliance (NERFA) conference in November 2013. Both classically trained singers and up-and-coming musicians in the DC-area folk scene, they soon realized their musical influences were similarly shaped by the folk revival music of the 1960s. Soon, Joan & Joni was born.

Allison and Kipyn’s power comes from their authenticity as performers; they touch people not just through their music but also through their passion and drive to inspire and connect with their audience. They perform a collection of timeless songs by Joan Baez and Joni Mitchell and reveal a few hidden gems from Joan and Joni’s long musical catalogs. By weaving Baez and Mitchell’s themes together with their own individual messages, Allison and Kipyn place an important part of American history in a modern context.

Allison, who teaches public speaking and presentation skills as a way to help others find their voice, held a CD release party for her 2012 debut recording of original songs at Club Passim –- the famed Cambridge, Massachusetts coffeehouse venue where Joan Baez got her start in 1958.

Dubbed “a beauty of a singer” by John Gorka, Kipyn was honored by the Washington Area Music Association in 2015 with a WAMMIE Award for New Artist of the Year. She has also received numerous awards in the Mid-Atlantic Song Contest and showcased her talents at a joint Southeast-Northeast Regional Folk Alliance Conference in 2014.

For more information and to listen to music and view videos, visit www.joanandjoni.com.