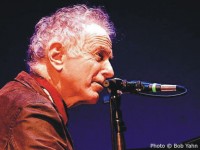 Aptly described as “the Renaissance man of American music,” David Amram is a composer, a conductor, a soloist, an improvisational lyricist, an author, and a multi-instrumentalist who plays piano and various horns and whistles – as well as dozens of folkloric instruments from around the world. A pioneer in ‘world music’ dating back to before the term even existed, he’s been engaged in and has integrated many genres in his work — including folk, jazz, classical and chamber music.

Amram is considered a pioneer of the French horn in jazz. He has composed more than 100 orchestral and chamber works – including “Symphonic Variations on a Song by Woody Guthrie” (commissioned by the Woody Guthrie Foundation) and “Theme and Variations on Red River Valley.” He’s written two operas and numerous theatrical and film scores – notably including those for Splendor in the Grass and The Manchurian Candidate. He’s worked with such musical luminaries as Leonard Bernstein, Dizzy Gillespie, Nina Simone, Odetta, Bob Dylan, Steve Goodman, Levon Helm, Pete Seeger, Arturo Sandoval, Mary Lou Williams and many more. And he’s a musical luminary in his own right. Why, he’s even been immortalized in a popular children’s song by Raffi – “One for me and one for David Amram.”

Many honors have been bestowed on Amram. He’s the subject of a documentary film entitled David Amram: the First 80 Years. He’s been the recipient of a Pete and Toshi Seeger Power of Song Award, several lifetime achievement awards, and six honorary doctorates.