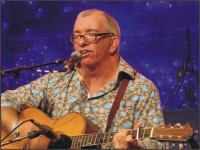 James Keelaghan is among today’s most-esteemed Canadian folksinger-songwriters. A Juno Award [Canadian Grammy] -winner, he has been hailed as “Canada’s finest songwriter” by Dave Marsh, a noted American music critic and historian. Others consider Keelaghan a poet laureate of the Canadian folk and roots music world. “[His] is a voice in contemporary Canadian songwriting that has helped us define who we are as a people,” says David Francey, himself a much respected, award-winning Canadian singer-songwriter. “He writes with great humanity and honesty, with an eye to the past and a vision of the future. He has chronicled his times with powerful and abiding songs, with heart and eyes wide open.”

A Calgary native, who now calls Perth, Ontario home, Keelaghan has been plying his craft for more than 25 years. His music fuses contemporary folk with roots rock and Americana /Canadiana. “Among the most distinctive voices on the Canadian singer-songwriter scene, this baritone also is a masterful storyteller known for his literate and layered narrative songwriting,” according to Michael Kornfeld, FMSH’s president. Keelaghan’s love of language and of history is reflected in his songs; some of them touch on themes of social justice and problems facing society, while others — like “Cold Missouri Waters,” “Fires of Calais” and “Hillcrest Mine” — focus on tragic historical events. He’s also known for his interpretation of songs by others – including fellow Canadian Gordon Lightfoot, whose “Canadian Railroad Trilogy” Keelaghan covered on the tribute album Beautiful.

FMSH is delighted to welcome James Keelaghan to grace our stage for the first time.