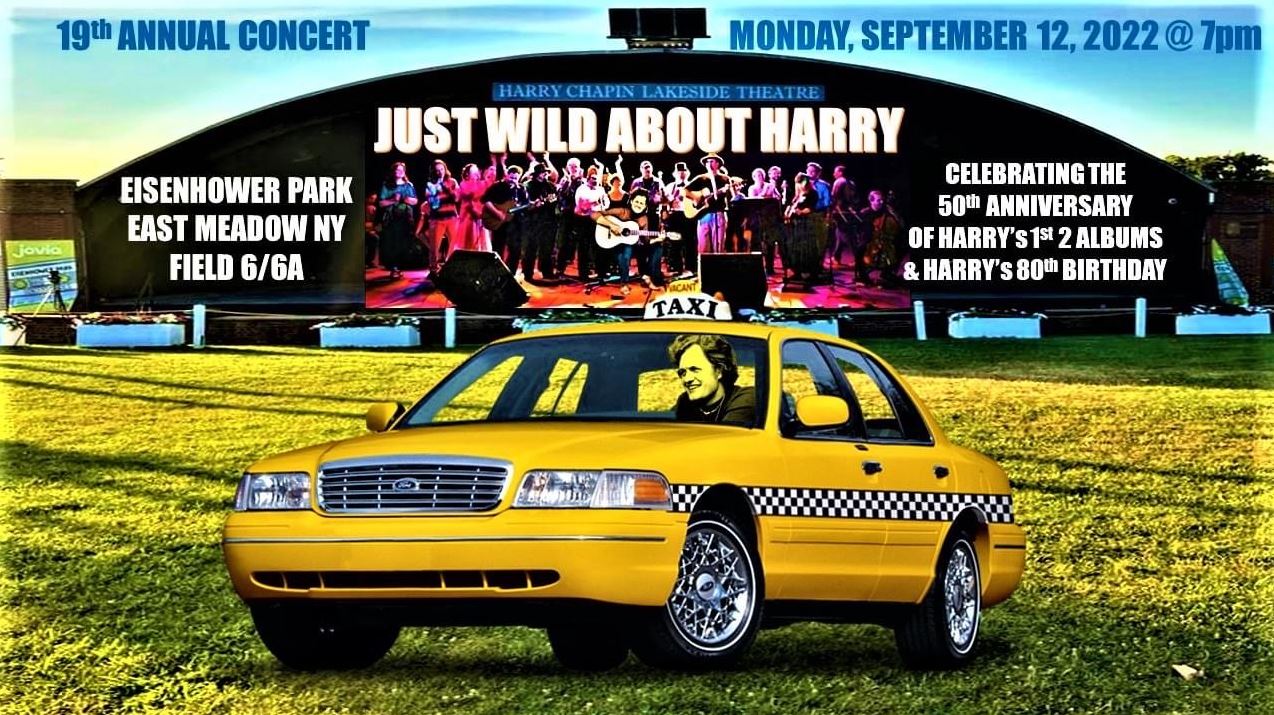 This year’s Harry Chapin tribute concert and food drive has been rescheduled for Monday, September 12.  More than three dozen of Long Island’s top musicians and songwriters will take to the Harry Chapin Lakeside Theatre at Eisenhower Park in East Meadow at 7:00 p.m. to perform the music of the late Grammy-Award-winning singer-songwriter and social activist. The concert will also be livestreamed via the “Just Wild About Harry” (The Harry Chapin Tribute Show) Facebook group and will be available for later viewing. This year’s concert — the 19th annual and 17th at the park — will mark the 50th anniversary of the release of Chapin’s breakout hit “Taxi.”

The Just Wild About Harry tribute concert will feature 16 acts — including concert organizer Stuart Markus and his trio Gathering Time — performing such Chapin classics as “Taxi” and “Cat’s in the Cradle” plus lesser hits and fan favorites like “WOLD” and “Story of a Life.” The concert is free, but concertgoers are asked to bring donations of nonperishable food to support Long Island Cares, Inc., the regional food bank founded by Chapin in 1980.

This July marked the 41st anniversary of Chapin’s tragic death on the Long Island Expressway in 1981 — on the day that he was supposed to perform on that very stage, since renamed for him. Several tribute show regulars were among the crowd in 1981 when what was supposed to be a joyous event turned into a vigil, Markus said.

“Harry is so beloved in memory on Long Island,” Markus said. “You don’t have to look too hard to find someone who met him, whose school he did a benefit for, or someone who’s been helped by one of his charities. It’s so meaningful for the music community to come together and, in effect, do the concert he might have given.” Each act is encouraged to do its own interpretation of the song they do, Markus added. “We’ve had some amazing arrangements, from folky to country, torch-song style to hard rock.”

The concert will also be a benefit for Long Island Cares, the Harry Chapin Food Bank. “The annual Harry Chapin tribute concert in Eisenhower Park is always a very special event for all of us at Long Island Cares because so many of Harry’s fans attend and are extremely supportive of Long Island Cares and the work we do to assist the more than 316,000 Long Islanders struggling with domestic hunger and high food insecurity,” said Paule Pachter, the nonprofit organization’s chief executive officer.

As in past years, the Just Wild About Harry concert is being co-promoted by the Folk Music Society of Huntington, of which Markus is a board member. Harry Chapin lived in Huntington with his family.

The concert will be held rain or shine, precluded only by thunderstorms.