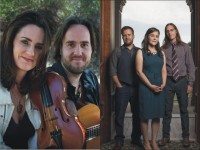 The Belle Hollows is a Nashville-based contemporary folk trio comprised of siblings Jeremy and Rachel Johnson and their friend Robert Phaneuf.

Launched in early 2016, the trio had the #2 album on the international Folk DJ chart for August 2016 and shared the month’s most-played song (“A Different Kind of Rain”), while several other tracks from Miller’s Creek, its debut album, were in the top 20. The three previously spent the better part of a decade developing a unique vocal blend featuring tight harmonies as part of the newgrass band The Barrel Jumpers. As a reviewer for Maverick Magazine (UK) wrote, the “tasteful acoustic” music of The Belle Hollows “ought to appeal to fans of the likes of Nickel Creek and Alison Krauss.”

Touring as a duo since 2008, Stephanie Bettman (singer-songwriter and fiddler) and Luke Halpin (multi-instrumentalist) are known for their storytelling and playful banter between songs, as well as for their hooky whole-hearted songwriting and instrumental prowess. Bettman & Halpin have been Falcon Ridge Folk Festival “Most Wanted” artists, grand prize-winners in the So Cal Live Acoustic Music Competition, and two-time featured artists at the Walnut Valley Festival in Winfield, KS. Their CDs have received much radio airplay and critical acclaim.