Steady On: Celebrating Lilith Fair at 20 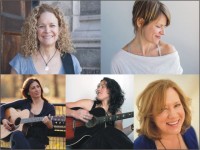 Trina Hamlin: Trina Hamlin combines gentle understanding with raw emotion in a way that is, quite simply, captivating from the first note. She seamlessly moves from guitar to piano with self accompaniment on harmonica leaving many who have seen her wondering what she can’t do. Regarded as one of the best harmonica players around, she presents a driving, sensuous rhythm in her performance reawakening audiences to the art of the instrument. “Trina Hamlin’s music smolders sweetly just before it sets the place on fire. Add in that irresistibly twinkling grin and you’ve got the foundation for a wonderful time.” –Marilyn Rea Beyer, WUMB Boston

Lara Herscovitch: “Pure musical poetry” (The Courier), Herscovitch is an “extraordinarily talented” (smother.net) singer-songwriter and former Connecticut State Troubadour, blending modern folk with blues, jazz, and pop influences into “marvelous, inventive and thought-provoking songs” (NJ.com). “A rising talent who is truly someone to watch for” (Acoustic Live in NYC), she has appeared on A Prairie Home Companion with Garrison Keillor and tours regularly from Maine to Miami.

Amy Soucy: Beacon, NY-based Amy Soucy was the winner of the 2016 CT Folk Songwriting Competition and a 2016 Falcon Ridge Folk Festival Emerging Artist. She is well-known for her vocal talents (“as comforting as a walk in the autumn woods” — Joe Pszonek, Radio Nowhere) and her timeless, poetic songwriting. Amy has a lifetime of varied singing experiences (choral, musical theater, even opera) and has performed, recorded, written and harmonized with a wide range of musical artists.

Sloan Wainwright: Defying standard categorization, singer/songwriter Sloan Wainwright consistently demonstrates her easy command of a variety of American musical styles — pop, folk, jazz and blues — held together by the melodious tone of her rich contralto, with the end result being a unique and soulful hybrid. Her family tree (brother and folk-music luminary Loudon Wainwright, nephew Rufus Wainwright, nieces Martha Wainwright and Lucy Wainwright Roche) reads like a who’s who of contemporary folk music, while media has praised her as “…one of those singers whose performance is a force of nature.” –Sing Out Magazine