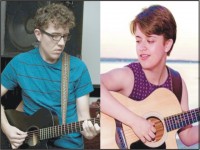 Bryan Gallo and Anne O’Rourke, two young Long Island-based singer-songwriters, share the bill during the monthly Hard Luck Café series at the Cinema Arts Centre (423 Park Avenue, Huntington) on Thursday, February 21. The 8:30 p.m. concert in the cinema’s Sky Room will be preceded by an open mic at 7:30 p.m. Tickets are $15 ($10 for Cinema Arts Centre and Folk Music Society of Huntington members) and will be available at the door.

Bryan Gallo is inspired by the pressures and consequences of living life romantically. Intrigued by both the sounds of alternative country-rock and wistful pop music, he embarked on a career as a performing singer-songwriter and began to pen songs that are deeply personal but still readily accessible. Steeped in reflective heartache, the lexicon of Gallo’s lyrics stands as a testament to his raw talent as a musician while weaving a flush and relatable narrative.

Gallo has performed at such noted venues as The Vail Leavitt Theater in Riverhead and the historic Guild Hall on LI’s East End; notable NYC clubs including Arlene’s Grocery, Pianos, and The Mercury Lounge; as well as at the Great South Bay Music Festival and the Montauk Music Festival. He released his debut album, The Party Guest, in late 2014 and a holiday-themed EP a year later. (www.bryangallo.com)

Anne O’Rourke hails from LI’s North Fork. Her music blends her love of indie, folk and musical theater, while her songs are about personal growth and reshaping the narrative into something positive. O’Rourke studied violin as a child, picked up her first guitar at age 14, and began writing songs at the urging of her instructor. Her passion for music and songwriting extends beyond the stage and into the classrooms of preschoolers with special needs, where she works as board-certified music therapist.

New to the music scene, O’Rourke showcased her talents during last summer’s Huntington Folk Festival and the Fresh Brewed Sessions Concert Series, and she also was featured on 90.1 FM’s Homegrown Long Island. Her debut self-titled EP – recorded with Huntington’s own Kirsten Maxwell and Carley Ridini (Car Astor) – was just released this winter. (www.anneorourkemusic.com)