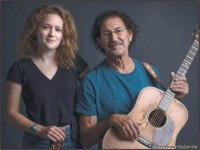 Freebo, a veteran singer-songwriter and musical sideman (who was Bonnie Raitt’s bass player for 10 years), was impressed upon first hearing Alice Howe perform during the 2016 Northeast Regional Folk Alliance (NERFA) Conference. After reconnecting with the talented newcomer at the 2017 Folk Alliance International Conference, Freebo invited Howe to record a few songs with him in California – and a musical partnership was forged. Each a compelling performer in their own right, they have been touring together and backing each other on their respective songs in concert, while Freebo produced Howe’s debut full-length album, Visions.

With her soulful, impeccably tuned voice and well-crafted poetic lyrics, Boston area-based singer-songwriter Alice Howe has a pure, distilled sound that reflects a musical sensibility rooted in 1960s folk and 1970s Southern California songwriters. Howe’s 2017 EP You’ve Been Away So Long features her original song “Homeland Blues,” which debuted at #1 on the international Folk DJ top songs chart in April 2017. She participated in that year’s Falcon Ridge Folk Festival Emerging Artist Showcase and has earned coveted official juried showcases during the conferences of two regional affiliates of Folk Alliance International.

After more than 40 years of recording and touring with many of the great artists of our time (Bonnie Raitt, CSN, Maria Muldaur, John Mayall, Ringo Starr, Dr. John, Neil Young, and more), Freebo has come into his own as a singer-songwriter. A multi-award winner and finalist in numerous songwriting contests, Freebo was recognized as the Best Folk Artist – 2007 in the Los Angeles Music Awards. He has appeared on Saturday Night Live, The Muppets Show, The Midnight Special, and in concert with the legendary Spinal Tap.