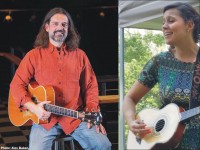 Steven Pelland, a native of Fall River, Massachusetts, began his musical journey at the early age of seven, learning accordion and organ. His father, a professional guitarist and vocalist, inspired him to study electric bass and voice during his teens. At 19, Steven graduated from the Modern School of Music and began freelancing as a bassist on Boston’s jazz scene.

During the past several decades, Steven has written hundreds of songs – 12 of which appear on his recent CD, These Days. A finger-style guitarist and vocalist, he cites Jackson Browne, Dougie MacLean, James Taylor and Johannes Sebastian Bach among his influences. A touring artist, Steven showcased his talents during last summer’s Huntington Folk Festival and at regional conferences of Folk Alliance International. (stevenpellandmusic.com)

“It’s not your mama’s folk music,” Aly admits. Take the cool tone of Norah Jones, the guttural growl of Fiona Apple, and the unorthodox guitar work of Ani DiFranco – and you’ve got this half-Egyptian/half Texan songwriter who has performed more than 700 shows worldwide since her 2009 debut. A finalist in the prestigious 2016 Grassy Hill Kerrville New Folk Competition for Emerging Songwriters, Aly also showcased her talents during this year’s Huntington Folk Festival. “Her guitar writhes the floor of the mind, haunted by the honesty of her lyrics” (USA Today). She released her latest CD, Hungry Ghost, in November. (alytadros.com)