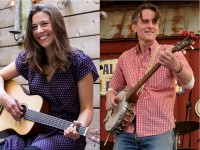 Lisa Bastoni and D.B. Rielly, both multiple award-winning singer-songwriers, are the featured performers during the monthly Hard Luck Café series at the Cinema Arts Centre (423 Park Avenue, Huntington, NY) on Thursday, Nov. 21. Bastoni and Rielly were named as winners of the prestigious Kerrville New Folk Competition for Emerging Songwriters held in the Texas Hill Country and also showcased their talents during the Huntington Folk Festival this summer. The 8:30 p.m. concert in the cinema’s Sky Room will be preceded by an open mic at 7:30 p.m. Tickets are $15 ($10 for Cinema Arts Centre and Folk Music Society of Huntington members) and will be available at the door.

After inheriting her grandmother’s guitar and a bag full of handwritten cover songs in 2017, Massachusets-based folk singer Lisa Bastoni returned to music after a 10-year absence. The mother of two had taken a break after spending time busking in Boston after college, but finding her grandmother’s lyrics ignited something irresistible inside her: she says she felt the routines of her own life shaking loose.

Her new release, How We Want to Live, chronicles life changes — including songs about the dissolution of her marriage and learning to live a new normal — but more than anything, it finds the songwriter diving deeper into the life she craves. A 2019 Boston Music Award nominee for Folk Artist of the Year, Bastoni also was a grand-prize winner in the 2017 Great American Song Contest, participated in the 2017 Falcon Ridge Emerging Artist Showcase, and secured coveted juried official showcases at the Northeast and Southwest Regional Folk Alliance (NERFA and SWRFA) conferences.

D.B. Rielly is a real American songwriter who sings funny, openhearted, and touching songs with an everyman ease. The New York-based multi-instrumentalist has played live at the famed Montreaux Jazz Festival and at such notable venues as Lincoln Center, Staples Center, and The Apollo Theater. He has performed with B.B. King, The Boston Pops, and Chubby Checker, among others.
Rielly has released four full-length albums. His 2018 release, Live from Chester, landed on several radio stations and publications’ annual “Best of” lists — as did his 2017 release, Live from Long Island City. A top-five winner in the 2012 Great American Song Contest, Rielly also has been a runner-up, finalist or semi-finalist in a number of other songwriting competitions. He promises an “instantaneous cure for all afflictions” and adds: “I personally guarantee that if these here concocted remedies fail to eliminate all the trouble & woe that befall man or beast… I’ll eat a bug.”