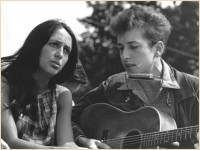 Bill Shelley of Shelley Archives Inc. presents a Music Legends Live educational lecture with film clips on The Folk Movement of the 1960s and 1970s at the Cinema Arts Centre (423 Park Avenue, Huntington). FMSH is pleased to co-sponsor this special event, and its members will be afforded the same discount as Cinema members when purchasing tickets.
Besides the tradition of preserving the songs of anonymous composers whose work was passed on from generation to generation, the folksinger-songwriters of the 1960s and 1970s added their own voices and stories to the folk tradition. From personal stories to political protests, these artists challenged our minds, entertained us, and recorded our history. With guitars in hand, they ruled the coffee houses and airwaves with their songs and struck a nerve with the younger generation.