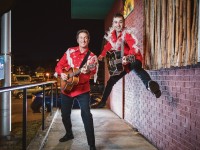 The Everly Set: Noted NYC-based singer-songwriters Sean Altman & Jack Skuller pay tribute to their rock heroes, The Everly Brothers, in a show that takes you back to 1957 when teenagers Phil and Don Everly first burst on the scene and supercharged the vocal sound of rock’n’roll with sparkling harmonies that influenced The Beatles, The Beach Boys, Simon & Garfunkel, The Hollies, and The Bee Gees. Come and sing along to such hit songs as “Bye Bye Love,” “Cathy’s Clown,” “Wake Up Little Susie,” “All I Have To Do Is Dream,” “When Will I Be Loved,” “Crying In The Rain,” “Till I Kiss You,” “Love Hurts,” “Bird Dog,” “Claudette,” “Let It Be Me,” and more Everly (and Everly-influenced) classics from the late 1950s through the 1980s.

Blessed with a silky tenor voice that produced chills (The New York Times), Altman is widely viewed as the father of modern a capella. He co-founded and led Rockapella on the Emmy Award-winning PBS-TV series Where In The World Is Carmen Sandiego?, for which he co-wrote the theme song. Altman also currently sings a cappella with The GrooveBarbers and Doowopera, original pop songs on guitar as a solo artist, and original comedy songs as JEWMONGOUS.

Skuller is a recipient of the Holly Prize, an award made possible by the Songwriters Hall of Fame as a tribute to the legacy of Buddy Holly. A writer for The Deli Magazine referred to him as a teen idol in the wrong era, noting that Buddy Holly would be proud. Skuller has performed his original music around the country with Radio Disney. He has also been a regular performer with the acclaimed Losers Lounge tribute series at Joe’s Pub in NYC.