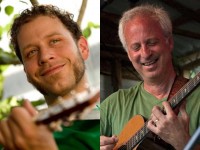 Tickets for this event are available at the Cinema Arts Center on the day of the performance. Prices are $10 for FMSH and Cinema Arts Centre Members / $15 for Non Members. There are no advance tickets for this event.
Larry Kolker is an American roots musician with a postmodern edge and a style that ranges from rhythmic folk and soulful blues to power pop rock. His lyrics run the gamut from the personal and passionate to the ironic and political, and evoke emotions that span the spectrum from desperation to joy. Larry is also a versatile guitar player and blues harpist whose musical influences include artists such as Bob Dylan, John Prine, Jerry Garcia, Bonnie Raitt, David Bromberg and Elvis Costello. Originally from Huntington and a graduate of Huntington High School, he now lives in New York’s lower Hudson Valley.

Larry has performed at the Huntington Folk Festival, the Montauk Music Festival, the Borderline Folk Music Club Picnic, and the Bob Dylan Festival at the Warwick Valley Winery, among other events. His 2012 album, Awful Smart Man, is a musical tour de force co-produced with Fred Gillen, Jr. that features Gillen on bass guitar and backing vocals by The YaYas.

Scott Cook is a prairie balladeer from Alberta, Canada whose straight-talking tunes weave together folk, roots, blues, soul and country music with spacious fingerstyle guitar and clawhammer banjo arrangements. He brings humor, a disarming honesty and a deep love of humanity to his songwriting and storytelling, drawing on a wide range of roots music influences.

Since 2007, Scott has been performing all over the world — touring extensively in the United States, Canada, Europe and Asia. Acclaimed Canadian songwriter David Francey has noted that “Scott Cook has distilled his travels down into songs powered by a sharp eye for imagery, a healthy dose of humanity, and that unforgettable voice that at the same time intones the rigors of the road and the most comfortable couch you’ve ever slept on.” Scott’s latest album, One More Time Around, features his song “Pass It Along,” which earned top honors in the Folk and Acoustic category of the 2013 UK Songwriting Contest.