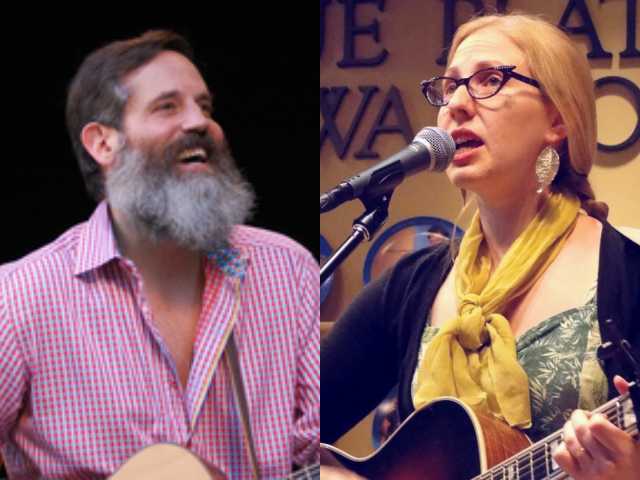 Rebecca Pronsky is a Brooklyn-based singer-songwriter whose musical style combines elements of country and folk with jazz and alternative influences to create a twangy urban-folk sound that highlights her sophisticated and poetic lyrics. A singer since childhood, she began writing songs in her teens, and studied ethnomusicology and jazz at Brown University. Since then, she has recorded three albums and toured extensively, playing in numerous clubs and at festivals both domestically and internationally including spots at the Huntington Folk Festival and the Folk Music Society of Huntington’s First Saturday series.

Rebecca’s most recent album, Only Daughter, was produced by her husband and musical partner, guitarist and Staten Island native Rich Bennett, and named a Top Ten Country Album of 2013 by the UK’s Daily Telegraph. According to NPR, her “voice conveys the wisdom of experience (with songs that are) personal, anecdotal, and emotional.”

Bill Scorzari is a Huntington-based singer and songwriter whose original music combines elements of roots, folk, Americana and traditional styles with his thought-provoking lyrical imagery and signature voice. Bill’s influences include artists such as Justin Townes Earle, Blind Willie Johnson, Joe Pug and Townes Van Zandt, among many others. His band, The Raddle Chains and Straw Walkers, is comprised of some of the most sought-after musicians in the tri-state area, and he has performed at such venues as The Paramount in Huntington, the Long Island Fall Festival, Patchogue Theater for the Performing Arts, and the Long Island Folk Festival, along with venues in Nashville and Franklin, Tennessee.

Bill’s first album is entitled Just the Same, and he is currently nearing completion of two more album releases: The Promised Land and Modern Times. In his first appearance at the Hard Luck Café, Bill will be joined by Bill Herman on percussion, Michele Sivori on background vocals, Paul Johnston on keyboards, Skip Krevens on pedal steel, Steve Kaplan on bass and Tom Ryan on drums.