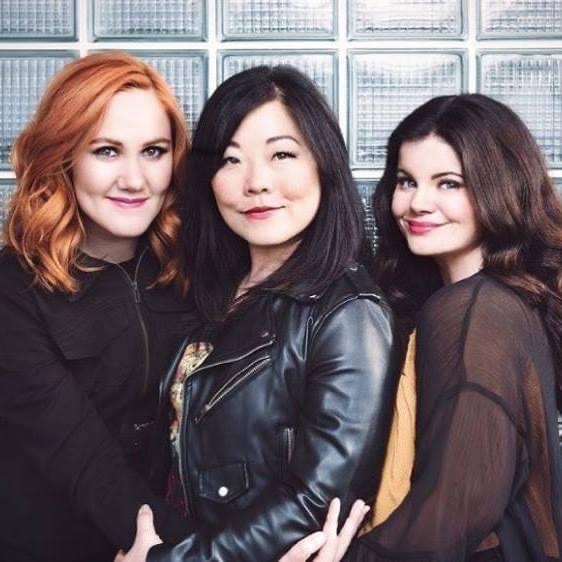 “Although the COVID-19 pandemic prevents the Folk Music Society of Huntington from hosting in-person concerts now, the FMSH board of directors recognizes the importance of music in these challenging times and believes that the show must go on-line,” said Michael Kornfeld, FMSH’s board president. Accordingly, artists are being booked for both the monthly Hard Luck Café and First Saturday Concerts series, and will livestream concerts from their homes to yours via various social media platforms. “ There is no admission charge for this online concert, “Kornfeld notes: “However, tips for the artists — who have lost many gigs and are unable to tour due to the ongoing health crisis — would be most appreciated.” Information about online tipping will appear on your screens during the concert.

Nobody’s Girl evolved from a one-time, three-week song swap in late 2017 when the three longtime friends decided to embark on a tour together. BettySoo, Rebecca Loebe and Grace Pettis have been accomplished artists in their own right, with more than 15 albums between them, and each has been a winner in the prestigious Kerrville New Folk Competition. But it’s the gorgeous sound of their voices, be they harmonizing as one [which they, unfortunately, can’t do online from separate locations] or trading leads with the graceful, elegant precision of aerial silk dancers, combined with the revelatory nature of the songs they co-write, that sets them apart as a trio.

“In a lot of ways, I think of Nobody’s Girl as a super fun project that lets us blow off steam, because it gives us a whole different channel to tap into,” says Rebecca. “But most of all, I’m always really moved by the power of what we’re able to access as a trio: just the power of three voices onstage together, carrying the same message.”

Until the pandemic curtailed touring last spring, they had carried that message for the better part of two whirlwind years, playing more than 100 shows together from Texas to Ireland in support of a 2018 EP entitled Waterline and a handful of singles released in late 2019. That “power of three” will be even more strikingly captured on the trio’s self-titled full-length debut that is set for release on July 30.

On Thursday night, January 21, online viewers and listeners will get more than a glimpse of what BettySoo playfully calls their “”bubblicious” sound. “By that, I don’t mean that it’s flaky or light,” she explains, “because I think our songwriting instincts are all honed from the folk world. But I do think that the textures we tap into when we write together for Nobody’s Girl are definitely more pop.”

“And I don’t think there’s anything bad about that,” adds Grace. “I think for some people, ‘pop’ is almost like a dirty word – especially in a town like Austin that’s all about ‘serious’ music with integrity. But sometimes something fun is good in its own right. The kind of songs I want to write are the ones that have something to say, but that also make your foot tap and that you want to play really loud in your car and sing along to. And in a lot of ways, those songs are a lot harder to write, at least for me. But as a band, I think we are able to really do that sometimes. I don’t know what it is about the combination of our different backgrounds that brings that out though, and it actually really surprised us when we started recording that EP… We were all [saying] “Oh, wow – these are pop songs!”

Says FMSH’s Kornfeld: “However you describe them, tune into our livestream on January 21 and enjoy Nobody’s Girl’s original songs interspersed with delightful banter, and, perhaps, a choice cover or two as only these three talented women can sing them.” More information on the trio, along with a few videos, may be found online at http://www.wearenobodysgirl.com.

Established in 1973, the Cinema Arts Centre (www.cinemaartscentre.org) seeks to bring the best of cinematic artistry to Long Island and use the power of film to expand the awareness and consciousness of our community. Long island’s only not-for-profit, viewer-supported independent cinema presents a wide array of films that are often accompanied by discussions and guest speakers.