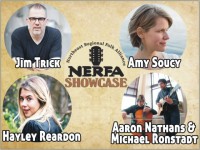 The Folk Music Society of Huntington (FMSH) partners with the Northeast Regional Folk Alliance (NERFA), a regional affiliate of Folk Alliance International, in presenting a NERFA Showcase to close out the current season of its monthly Hard Luck Café series in the Sky Room at the Cinema Arts Centre (423 Park Avenue, Huntington, NY) on Thursday evening, June 16. The 8 p.m. concert will be preceded by an invitational mic beginning at 7 p.m.

“For this very special show, we have invited five artists who have recently had juried official showcases at annual NERFA conferences to share their talents with our audience,” says Michael Kornfeld, president of FMSH and vice president of the NERFA board of directors. “Aaron Nathans & Michael Ronstadt, Hayley Reardon, Amy Soucy and Jim Trick will participate in two hour-long song swaps that will be preceded by an invitational mic featuring artists from Long Island and the New York metro area who regularly attend the conferences.” Among the talented artists who will each perform a song during the invitational mic are Mark Alan Berube, Jay Hitt, Lisa Jane Lipkin, Kirsten Maxwell, Cheryl Prashker, and others tba. Refreshments – including craft beer and wine – will be available.

About the Featured Performing Artists

Aaron Nathans & Michael Ronstadt: A singer-songwriter with a propensity for penning songs about subjects others haven’t has joined forces with a virtuoso cellist who hails from musical royalty (he’s Linda’s nephew) to form a duo that has been drawing critical acclaim. Aaron Nathans brings his brilliant, off-kilter world-view and warped sense of humor to live shows that are as captivating as his guitar work, voice and catchy melodies. Michael Ronstadt (cello, guitar, mandolin) carries on his family’s eclectic musical tradition with adventurous, mind-bending songs. The duo recently showcased their talents as part of John Platt’s monthly “On Your Radar” series in NYC. (www.aaronnathans.com, www.michaelronstadt.com)

Hayley Reardon is a Massachusetts native noted for her thoughtful, vivid songwriting and engaging stage performance. Performer Magazine describes her music as “brilliantly moving folk/pop with a lyrical depth and soul.” In 2012, The Boston Globe Magazine named her a Bostonian of the Year for both her music and her work to pair it with a message of youth empowerment. In a live setting, Reardon’s soulful songs are carefully intertwined between thoughtful stories and soft, clever humor to form a comforting, yet commanding, stage presence. Hayley Reardon is full of heart, and what’s even better is that she has proven her ability to share that heart and make an audience feel her songs and stories just as strongly as she does. (www.hayleyreardon.com)

Amy Soucy is a Beacon, NY-based contemporary folk chanteuse who writes evocative songs exploring the kaleidoscope of human experience (dreams, longing, forgiveness and healing) and sings them in a voice that’s been called “powerful,” “comforting,” and “angelic.” Dubbed “enchanting” by singer-songwriter Sloan Wainwright and “just gorgeous” by NJ folk radio DJ Joe Pszonek, Soucy’s 2015 debut album, This River, takes listeners on a soulful journey through a lush landscape of life, love and earth – full of timeless, poetic songwriting, soaring melodies and shimmering harmonies. The CD was among the top Folk albums of 2015 on both the Folk DJ Listserv and the Roots Music Report international radio airplay charts. (www.amysoucymusic.com)

Jim Trick is a Massachusetts-based singer-songwriter who combines carefully crafted lyrics with acoustic guitar instrumentation featuring percussive, intricate and ethereal ranges, to create a powerful music experience. He cites Neil Finn, Bruce Cockburn, John Gorka and Charles Bukowski as influences. An engaging and entertaining performer, Trick connects with audiences through his music, words and real life perspective. As a touring member of Banding People Together, Jim travels throughout the U.S. and beyond, using music and behavioral science to help companies create collaborative strategies and improve leadership. He is also a frequent speaker at Boston’s Berklee College of Music. (www.jimtrickmusic.com)