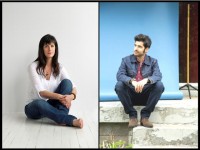 Louise Mosrie is a nationally touring singer-songwriter with a soulful folk- Americana style. She has received numerous honors for her songwriting. These include being named a winner in the prestigious Grassy Hill-Kerrville New Folk Competition in 2009, winner of the 2010 Wildflower! Festival Performing Songwriter Contest, an audience-voted “Most Wanted to Return” artist following the Emerging Artist Showcase at the 2011 Falcon Ridge Folk Festival, and winner of the 2016 SolarFest Performing Songwriter Contest.

Mosrie’s thoughtful, refined compositions are highlighted by her warm, expressive, crystalline voice. Mosrie’s craft grew from a childhood culture clash between her British parents and her southern upbringing. Although not too keen about the slow sleepy ways of doing things in her small rural Tennessee hometown, the melodies and imagery that emerged in her writing came straight from the culture she once dismissed: stories of joy, love, struggle and heartbreak told through the South’s vivid characters and scenery.

“William Faulkner with a guitar” is how Rich Warren, host of the nationally syndicated The Midnight Special that emanates from Chicago’s WFMT-FM, has described Mosrie.

Pete Mancini is a Bellerose, NY-based Americana roots singer-songwriter who got his start as the frontman and primary songwriter of Butchers Blind, a critically acclaimed rock band from NYC. His debut solo album, Foothill Freeway, explores the Americana influences that were a hallmark of his work with his former band and reveals the influence of such songwriters as Guy Clark and Bruce Springsteen.

Mancini’s songs have received glowing reviews and considerable radio airplay. In 2018, he released a live EP, Alive in Patchogue, while earlier this year, Diversion Records released his new roots rock-oriented studio album, Flying First Class. Although he frequently tours with his band, the Hillside Airmen, Mancini will appear solo acoustic for this show.

“It’s hard to believe Mancini hails from this area; his earnest voice and songs of world-weary struggles put him in line as a worthy successor to John Prine and John Hiatt as a premiere singer/songwriter whose work is destined to be covered by dozens of artists.”- Bob Smith (Good Times Magazine)