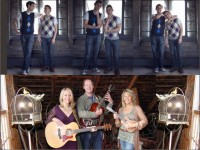 He Bird She Bird is a Long Island-based acoustic trio with a gravel, silk and honey vocal blend that brings a rich and heartfelt sound to their wide-ranging repertoire of both original songs and American acoustic roots music. Since striking up their band late last year, Todd Evans, Terri Hall and Christine Kellar have incorporated sparks of folk-rock, country, bluegrass and gospel to fuel their harmonious vocal collaboration, accompanied by their guitars and sundry other stringed instruments.

In the short time since launching their musical partnership, He Bird, She Bird has had people flocking to see them. They’ve performed at several local venues — including a well-received set during the Folk Music Society of Huntington’s Members Showcase Concert this past January. Christine, Terri and Todd have also been in the studio, recording their first He Bird, She Bird CD. This Hard Luck Café show will mark the band’s first featured performance for FMSH. Multi-instrumentalist Dee Harris will be joining them onstage.

The Lords of Liechtenstein is a quirky NYC-based acoustic folk duo comprised of two brothers – Noah on ukulele and vocals and Dan on guitar, banjo, mandola and vocals. Their sound has been compared to Simon and Garfunkel, while their onstage antics have drawn comparisons to The Smothers Brothers. It’s their instrumentation and introspective lyrics, however, that put them in a category all their own. “They are like the Everly Brothers with an attitude,” says Mark Miller, host of the Urban H2O concert series in Yonkers, NY and leader of the popular alt-roots band Spuyten Duyvil.

The duo first met in a hospital in July of 1994. “Hey, let’s start a band!” said Dan Rauchwerk to his new little brother, Noah. “Waaah!” said Noah as he had just been born and wasn’t quite able to speak yet, much less sing or play the ukulele. The brothers mutually agreed to wait a few years, until Noah was at least potty trained, before pursuing musical careers.

Although the debate rages on as to whether or not Noah is yet potty trained, the duo formally joined forces as The Lords of Liechtenstein in 2007. Noah and Dan have brought their unique blend of folk music to clubs and coffeehouses all over the East Coast. Their most recent album, Girlz (With a ‘Z’) shows off the duo’s versatility in songwriting and performing, moving effortlessly from reggae songs about the Israeli-Palestinian conflict to upbeat folk songs about having one’s heart broken and torn apart by wolves.