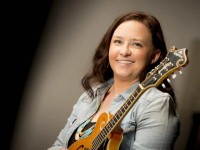 Libby Koch (pronounced “coke”) is a Houston-based Americana singer-songwriter who draws from a classic blend of country, folk and rock. She performed this summer at the Kerrville Folk Festival’s Threadgill Theater and in the Emerging Artists Showcase at the Falcon Ridge Folk Festival. She also was a finalist in the Wildflower! Performing Songwriter Contest and a semifinalist in the Songwriter Serenade. Libby was named Songwriter of the Year (2013) by the Houston Press and was selected for official showcases at last year’s Southwest Regional Folk Alliance (SWRFA) and this year’s Northeast Regional Folk Alliance (NERFA) conferences. She cites Emmylou Harris, Lucinda Williams, Janis Joplin, Patty Griffith & Dolly Parton as influences.

Earlier this year, the seventh generation Texan released her third full-length recording. Tennessee Colony is a collection of ten songs about family, faith and home inspired by the small East Texas town of the same name (pop. 150), where Libby’s mother’s family settled in the mid-1800s and in whose red clay ground many generations of her family were laid to rest. Several of the songs are based on stories her grandparents shared with her while she was growing up. Rich Warren, host of the nationally syndicated “Midnight Special” on WFMT in Chicago, named the album his CD of the Week (June 21, 2014).

Manitoba Hal, previously scheduled, is stuck in Canada on a visa issue, so Libby has agreed to perform both sets tonight.