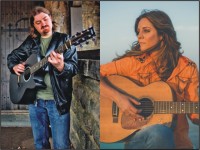 A pair of tickets to the Falcon Ridge Folk Festival (August 2-4) (Value $350) will be given to the winner of tonight’s raffle.

Kyle Hancharick and Monica Rizzio, two touring singer-songwriters, whose music veers towards the Americana/country edge of folk, share a bill during the monthly Hard Luck Café series at the Cinema Arts Centre (423 Park Avenue, Huntington, NY) on Thursday, June 20. The 8:30 p.m. concert in the cinema’s Sky Room will be preceded by an open mic at 7:30 p.m. Tickets are $15 ($10 for Cinema Arts Centre and Folk Music Society of Huntington members) and will be available at the door.

For Kyle Hancharick of Warwick, New York, it’s always been about the music. His passionate performances are punctuated by a crisp acoustic guitar and soaring tenor vocals , as revealed in his 2018 EP entitled Breathe. The four-song project consists solely of acoustic guitar, bass and vocals – and that’s all that’s needed for an artist whose roots are planted in contemporary folk music. Hancharick takes the world, processes it and turns it into song with his own special touch. He has a unique take on things and a view of the world others may not necessarily notice as he continues to grow as an artist – sharing his story and messages of love and peace. (kylehancharick.com).

Monica Rizzio grew up in the East Texas plains and moved to Cape Cod in 2004. The locals call someone who moves to but was not born on the Cape a Washashore – and the former Tripping Lily front woman’s acclaimed 2016 debut solo release was appropriately called Washashore Cowgirl. Rizzio blends Americana, bluegrass, country and folk song stylings into what she likes to call AmeriCountryGrass, Although she is the founder and co-owner of a roots-based music school on the Cape and also launched a nonprofit music production company (Vinegrass) that raises money for scholarships, instruments, and grants through concerts and an annual roots-music festival, Rizzio feels most at home when she is on stage sharing her songs. Says Tom Rush, an iconic folk artist with whom she’s previously performed: “I made the tactical error of inviting Monica Rizzio to share the stage with me at Symphony Hall and she went and stole the audience right out from under me.” (monicarizzio.com)