Joe Crookston and the BlueBird Jubilee with Peter Glanville 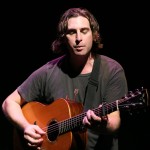 Joe Crookston an Ohio native now residing in Ithaca, NY, has been developing a reputation as an energetic, charismatic and thoroughly engaging live performer. He was among the artists voted “Most Wanted to Return” during the 2007 Falcon Ridge Folk Festival in upstate New York and wowed attendees in 2008 with a mix of his own lyrically compelling, narrative-style songs and choice covers (including a solo acoustic version of Supertramp’s “The Logical Song”) — much as he did during the Falcon Ridge Preview Tour”s concert in Centerport earlier that year. A serious craftsman, Crookston has heeded his father’s advice to work with his hands (and heart) in metal and wood. His latest album, Darkling and The BlueBird Jubileee has received critical acclaim. His previous release, Able Baker Charlie & Dog, a collection of songs inspired by stories ordinary New Yorkers from the Finger Lakes region related to him during his year-long travels under a songwriting grant from The Rockefeller Foundation, reached the top of the folk/acoustic radio charts and was recognized as Album of the Year during the 2009 International Folk Alliance Conference in Memphis, TN. His prior release, Fall Down As The Rain, was a Performing Songwriter Magazine Top 12 DIY independent recording. Joe Crookston also has been a finalist in several prestigious national songwriting contests.

Come and enjoy Joe as he stands on stage holding his Martin OM 28, stomping his foot, singing songs about ruby red dresses, drunk roosters, ex-slaves, window washers, Polish Immigrants, Tinian Island, rutabagas and the cycles of life & death — songs about the thread that runs through us all. Appearing with Joe will be Peter Glanville, guitar-picker and harmony singer, also of Ithaca.