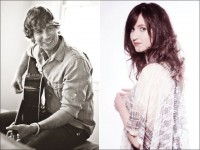 Jesse Terry is an award-winning, world-traveling, guitar-playing singer/songwriter whose home base just happens to be on the road. His intimate and evocative brand of Americana has drawn favorable comparisons to Ryan Adams, Jackson Browne, Paul Simon and James Taylor. “Sunny naiveté meets gritty wisdom” is how Dave Dircks of LIVE @ Deepwells (formerly Acoustic Long Island) describes him.

Jesse has performed across the nation and throughout the world — from Great Britain and Greenland to the South Pacific. Along the way, he attended the Berklee College of Music and landed a Nashville publishing deal just two months after graduating. He has been a Grand Prize winner of the John Lennon Songwriting Contest and the NSAI/CMT Song Contest, and his songs have gained placement on the televisions shows Hart of Dixie and Roadtrip Nation. His most recent album, Stay Here with Me, was released in 2013.

Jesse is “a force to be reckoned with,” says John Platt, host of Sunday Breakfast on WFUV. “His well-crafted songs rank right up there with Ryan Adams … and other masters of alt-country.”

Kat Quinn is a New York City-based singer/songwriter who hails originally from Marblehead, Massachusetts and writes lyrics marked by a charismatic combination of poetry and plainspoken language. She studied piano and percussion as a child, and got her first guitar at age15. Kat began writing songs in college, initially inspired by the heartbreak of a failed romance. From then on, songwriting became a consistent endeavor — fueled further by the time she spent studying abroad in Chile and later travels in Ecuador.

Sadness may have lit the match, but Kat’s upbeat personality fires her live shows, where she accompanies herself on guitar and ukulele. Her original songs feature “lightness and depth at the same time” (Verily Magazine) reminiscent of Ingrid Michaelson with a touch of Taylor Swift. Her songs have been featured in a film soundtrack and a VoxBox ad, and in 2013 she performed on Late Night with Jimmy Fallon’s Battle of the Instant Songwriters. Kat has also performed throughout the metropolitan area, including twice at the Huntington Folk Festival.

October’s Hard Luck Cafe series concert is a 2014 Arts Alive LI Arts Month event. A month-long celebration of the many cultural and entertainment attractions Long Island has to offer, Arts Alive LI is presented by the Long Island Arts Alliance and Bethpage Federal Credit Union. Now in its third year, Arts Alive LI will feature special events at more than 40 cultural venues across Nassau and Suffolk Counties. Long Island families and visitors are encouraged to log-on to www.artsaliveli.org for a complete list of events or visit any Bethpage Federal Credit Union branch location on Long Island to pick up a commemorative Arts Alive LI “Passport to the Arts” book that includes ticket coupons, discounts and prize-entry forms.